The following are a list of characters that have been featured in the Sonic the Hedgehog series. Note that some may not be listed due to their absence on a Nintendo console.

Sonic the Hedgehog is the main character of the series and debuted on the game of the same name. He's a blue hedgehog and is generally regarded as one of the most popular video game characters of all time. He's best known for his speed, which overtime seems to have increased. His first appearance alongside Nintendo characters (without bashing Sega) was in Mario & Sonic at the Olympic Games for the Wii, though his appearance in Super Smash Bros. Brawl unarguably made a bigger splash among fans. Sega and Nintendo's partnership with the two aforementioned games, among many others (such as the Triforce arcade system), signifies to a great extent just how far the two companies' relationship have come in comparison to 10 years ago when they were competing for the top spot.

Miles "Tails" Prower is one of Sonic's best partners and has been with the blue blur since Sonic the Hedgehog 2. It wasn't until the third installment would Tails, as he's better known, learned to fly using his two tails. His first appearance on a Nintendo owned console was Sonic Adventure DX: Director's Cut for the GameCube, though perhaps even more surprising was his and the rest of the Sonic gang's appearance in Mario & Sonic at the Olympic Games where he was featured as a playable character. 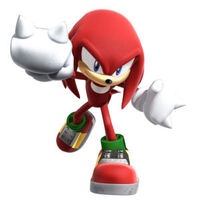 Knuckles the Echidna is a red colored echidna who first appeared in Sonic the Hedgehog 3. He has a short temper compared to the other protagonists of the series and is named after his large knuckles. His first appearance on a Nintendo owned console was Sonic Adventure DX: Director's Cut for the GameCube. In the games that he's appeared in he commonly helps Sonic find the Chaos Emeralds, and will even occasionally have his own missions. Ever since Rouge the Bat first appeared in a game, the two have had a rivalry, perhaps because of how similar the two of them are. Knuckles along with most of the other Sonic characters all appeared together with the Mario cast for the first time in Mario & Sonic at the Olympic Games. 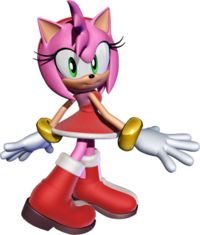 Amy Rose is one of the star characters of the series who made her debut on Sonic the Hedgehog CD, though first made her appearance on a Nintendo console with Sonic Adventure DX: Director's Cut for the GameCube (like most of the Sonic characters). She is perhaps best known for her giant mallet, her pink hair and her crush on Sonic, which unfortunately for her is not returned (Sonic simply views her as a friend). She, along with the rest of the Sonic cast, made their surprising debut alongside a Nintendo owned character in Mario & Sonic at the Olympic Games for the Wii (later remade for Nintendo DS). 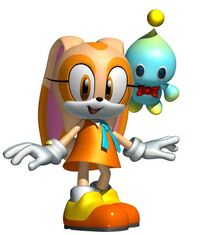 Cream the Rabbit is a bunny who is one of the few major characters to have debuted on a Nintendo system, the game being Sonic Advance 2 for the Game Boy Advance. She is best known for having a Chao friend named Cheese. The two of them travel together on their adventures, and even during gameplay Cheese won't be too far behind. She is also close friends with Amy (above). In Sonic Chronicles: The Dark Brotherhood for the Nintendo DS, Cream the Rabbit is an optional playable character. 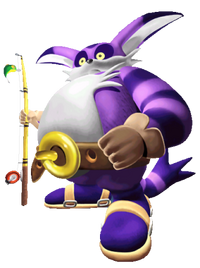 Big the Cat is a gluttonous protagonist who has a pet frog. His first appearance was that in Sonic Adventure, though Big would later appear in Sonic Adventures 2: Battle for the GameCube, which would be his first appearance on a Nintendo console. He loves to fish and live with his friend Froggy. His other major affiliation is that with his friend Amy Rose. 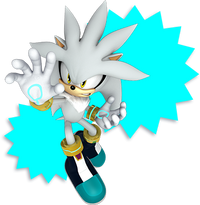 Silver the Hedgehog is a rival to Sonic. As of yet he has appeared in various Sonic video games, such as Sonic and the Secret Rings, Sonic Riders: Zero Gravity, Sega Superstars Tennis, and even Super Smash Bros. Brawl as a trophy and as a cameo on the Green Hill Zone stage. In most of the previously mentioned games he plays a very minor role, usually playing the role of a cameo. In Mario & Sonic at the Olympic Games, Silver the Hedgehog was planned to be included as a playable character, though was removed for unknown reasons. Nevertheless the player can still hack into the game and unlock him by doing so. 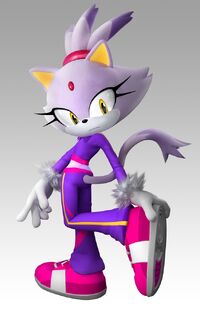 Blaze the Cat is a character from the Sonic the Hedgehog series, who comes from the another dimension. She is the defender of the Sol Emeralds, the counterpart to the Chaos Emeralds, and usually has to defend them from Eggman Nega. Blaze is Pyrokinetic, which means, she can harness and control the power of fire, hence her name. Blaze is also is royal in her own dimension as a princess, but she is sometimes called "Queen Blaze the Cat". Like in the official Sega of America Sonic mini site, Sonic Central. Interestingly, most of Blazes appearances have been on Nintendo consoles, with the exception of Sonic the Hedgehog (2006). Her first appearance was in Sonic Rush, which was also her first Nintendo appearance. Silver the Hedgehog and Marine the Raccoon are her best friends. She has a super form, known as Burning Blaze.

Neither friend nor foe 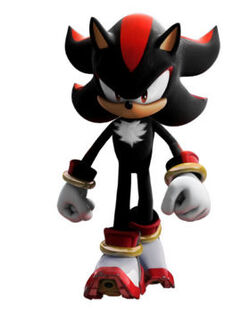 Shadow the Hedgehog is an anti-hero character in the Sonic the Hedgehog series, who debuted in Sonic Adventure 2, later remade in to Sonic Adventure 2: Battle. He was created by Dr. Eggman's grandfather, Gerald Robotnik, with the DNA of Black Doom, and was made to be the Ultimate Lifeform. However, after the Space Colony Ark was raided, which took the life of Shadow's good friend, Maria, Shadow was struck with amnesia, and attempted to destroy the Earth, believing it was Maria's request. However, after recovering much of his memory, Shadow ended up assisting Sonic in saving the Earth from the Biolizard. Shadow's somewhat rough past has made him very bitter and cold in current years, and due to this, he is capable of joining the cause of good or evil. He always ends up doing what is right in the end, however, and has grown a friendly rivalry with Sonic and Silver. 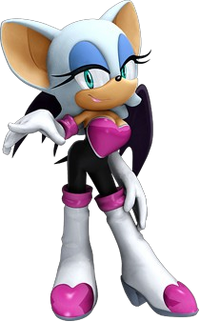 Rouge is a bat who loves gems, and will stop at nothing to get them. She can easily be distracted by gems, and once stole the Master Emerald, but Knuckles got it back by fighting her. She quoted: "Fine, you can have it, it looks like glass anyway".

E-123 Omega  or, simply Omega, is a fictional robot from the Sonic the Hedgehog series. He first appeared in Sonic Heroes and was created by Dr. Eggman, locked in a room, guarding Shadow the Hedgehog's stasis pod. He is allies with Rouge, and Shadow and create a team to take down Dr. Eggman, Team Dark. 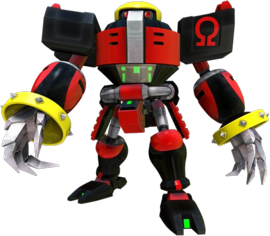 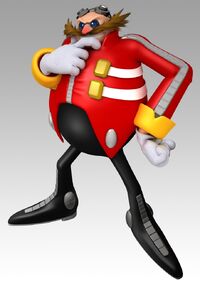 Doctor Eggman is a devious, evil scientist who invents many machines. He has tried, many times, to defeat Sonic and take the Chaos emerald, but Sonic always defeats him. He started trying to destroy Sonic altogether, but has never succeeded! He always comes back though, he won't let a little blue hedgehog slow him down!

Metal Sonic is a robot created by Dr. Eggman to defeat Sonic and with the power of the Chaos Emeralds, he can turn into Super Neo Metal Sonic!

Nintendo and Sega surprised many fans when they had announced that Sonic the Hedgehog would appear as a playable character in the Wii video game Super Smash Bros. Brawl. It was announced months before the game was actually released, and was accompanied by a video of the character in action. Besides Sonic, there were a variety of other characters from the series who made an appearance as well, including: