Romaji: Rippu) is the protagonist of the Japanese only SNES video game Panel de Pon, which was later remade for American and European audiences with a Yoshi's Island theme. She is known as the Fairy of Flowers and in the international releases she was replaced by Yoshi as the playable character. Her only real appearance in western shores was in Super Smash Bros. Melee, Super Smash Bros. Brawl, Super Smash Bros. for Nintendo 3DS/Wii U, and Super Smash Bros. Ultimate in the form of her wand known as Lip's Stick, which in the game appeared as an item. In the version included in Nintendo Puzzle Collection (which is based on the canceled Japanese release of what became Pokémon Puzzle League), she is replaced by a similar fairy named Furil.

In Panel de Pon the fairies of the world Popples are put under a spell by the evil Santos. The spell causes the fairies to start fighting each other, leaving it clear for him to take control of the land. Lip is however unaffected, due to her magic wand, the Lip's Stick. She sets out on a mission to return her fellow fairies to their senses, and one by one they join her for the confrontation with Sanatos.

In hard mode, the player will find out that the final boss - the goddess Corderia, actually is Lip's mother. She reveals that the whole adventure was a test to see if Lip was capable of becoming the next queen of the fairies. Seeing as she was able to defeat the queen herself, Corderia feels that the land will be in good hands in the years to come. 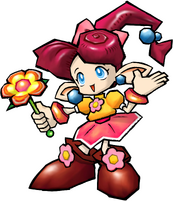 Add a photo to this gallery
Retrieved from "https://nintendo.fandom.com/wiki/Lip?oldid=507004"
Community content is available under CC-BY-SA unless otherwise noted.