Nintendo
Register
Don't have an account?
Sign In
Advertisement
in: Rated 3 by PEGI, Rated A by CERO, Rated G by ACB,
and 10 more 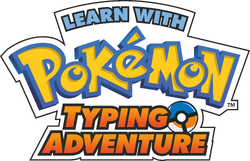 Meaning: Battle & Get! Pokémon Typing DS
) is an educational Pokémon series game for the Nintendo DS that teaches touch typing. It is a spin-off of Pokemon Black and White.

Conversely, the player gets a bonus if the name is typed sufficiently early. The player can start typing before the Pokémon's name is displayed or even when the Pokémon's cry is heard before the Pokémon itself actually appears, thus giving more score-increasing opportunities. Typing a series of Pokémon names correctly achieves a "combo" that multiplies the score of each subsequent successfully typed name.

At the end of a route, the score is displayed. A sufficiently high score would be put on the leaderboard of the route. Achieving the goals of a medal, even higher ones, would award the specific medal. (In other words, if a player fulfills the requirements for a Bronze, Silver, and Gold medal, even though the Top Screen only revealed the requirements of the Bronze Medal, the player will obtain the Bronze, Silver, and Gold Medals.)

Certain routes may have gimmicks. Some routes have a boss Pokémon at the end that may require the player typing out scattered letters that appear in the route. These boss Pokémon have gimmicks of their own that require advanced typing skills before being captured regularly. Other routes simply require typing the name of a key before finding a high-scoring Pokémon that can be regularly captured. Still other routes require the typing the letter(s) that an obstacle carries, since the obstacle can make thee current Pokémon flee if the obstacle is not removed.