Laurent (ロラン Roran) is a character from Fire Emblem: Awakening. He is Miriel's son from the future.

Laurent is the son of Miriel and the character paired with her. He came back in time but traveled back further then the rest of his companions making him older. He is found in the Shadow in the Sands campaign and is found in one of the mirage cities. To unlock him, Miriel must journey into the town herself, in which Laurent will run up to see her recognizing his mother. She will be too busy looking for the mirage village to talk right now but agrees to take him along with her. After the battle is won, Laurent will show his mother the ring he had obtained from her in the future. She believes this is inaccurate proof of him being her son, but in the end she agrees to call him that for now until the figure out the truth.

Laurent is very much like his mother, which disappoints his father greatly. In discussions between the two of them the father will wonder if Laurent inherited anything at all. One thing is inherited though, his hair color. Depending on which character is paired with Miriel, Laurent's hair color will change to match his father. 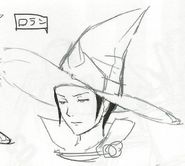 Add a photo to this gallery
Retrieved from "https://nintendo.fandom.com/wiki/Laurent?oldid=520091"
Community content is available under CC-BY-SA unless otherwise noted.