AudioGodz
db Talent
In Both Ears

Lani Jean Minella is an American voice actress, coach and director who has worked on several video games. She has been in the voice over industry since 1992.

Some of her credits include four of the seven Koopalings (Larry, Morton Wendy and Lemmy) in the Mario series (until she was replaced by Michelle Hippe (Larry), David Cooke (Morton), Ashley Flannegan (Wendy) and Carlee McManus (Lemmy) in Mario Kart 8) as well as Boom Boom and Pom Pom, Rouge the Bat, and Omochao in the the Sonic the Hedgehog games from 2001 to 2004, Lucas and Pit (Brawl only) in the Super Smash Bros. series, Luke Triton in the Professor Layton series and many others.

In addition to doing voice over she also servers as a voice coach and director. She has her own talent agency called AudioGodz. 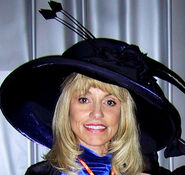 Add a photo to this gallery
Retrieved from "https://nintendo.fandom.com/wiki/Lani_Minella?oldid=566314"
Community content is available under CC-BY-SA unless otherwise noted.