Labolas, also known as the Destroyer of Fates, is a Demon that appears as a large canine-like creatures. Labolas used to be a regular pet dog who wandered into Inferno and got lost. His survival instincts helped him survive in the extremely hostile environment that is Inferno and he eventually turned into a Demon. Labolas is known for his incredible hunting skills.

Labolas is also featured as an unlockable battle in Tag Climax where he is presented as a none hostile Demons that only attacks the player after taking a hit. In battle, the Demon mainly attacks with its claws or by bitting.

"A beloved pet dog who had the bad luck to wander into hell, but the good luck and survival instincts to get through its harsh environment and grow into a force to be reckoned with. With the superb hunting abilities, it has even become known to some as a merciless butcher. Once it has sunk its sharp canines into its enemy, it will not let go until their last breath." 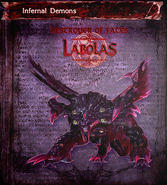 Labolas' page in the Book of Infernal Demons.

Labolas' card.
Add a photo to this gallery
Retrieved from "https://nintendo.fandom.com/wiki/Labolas?oldid=527347"
Community content is available under CC-BY-SA unless otherwise noted.