Romaji: Kyogre
) is a species of Pokémon in the series of the same name. It is a Water legendary Pokémon that made its first appearance in the third generation games Ruby and Sapphire. It can activate Primal Reversion if it holds the Blue Orb, turning into Primal Kyogre.

Kyogre is a massive, whale-like Pokémon with two big pectoral fins, each with four white square-shaped nails. It has a deep blue body and a white chin area with two small spikes protruding under it. Above each eye are two white, oval-shaped spots. Kyogre has red stripes around its chin, eyes, dorsal fins, and torso. These stripes glow when Kyogre is brimming with power. The tail is tattered with four trailing parts, with the inner ones being smaller than the outer. Its eyes are small, yellow, and shadowed with black.

Primal Kyogre retains its general body structure but grows to more than double the size of its base form. Its main skin color becomes a darker shade of blue, the red markings along its body become light blue, and its eyes glow yellow with orange irises and orange-red pupils. The markings on its pectoral fins slightly change to form α symbols, which connect to its outer nails with red markings connecting the inner nails. Every part of its skin that was white in its base form becomes clear and translucent, with the large ovals on its head now connected to clear markings stretching from its tail to its forehead, where another α symbol is formed. The trailing parts of its tail grow longer and gain translucent webbing, and the areas between its pectoral fin markings also become clear. The translucent parts of its body reveal organ-like structures that glow with a mysterious light; it has a large "organ" at the center of its body, two smaller ones aligned with the large oval markings, and two more located in its pectoral fins.

In Pokémon Sapphire and Alpha Sapphire, Team Aqua tries to awaken and control Kyogre. It is awakened by a blue orb that the group actively seeks. They eventually awaken Kyogre, but they are stopped by the player in the video games.

Kyogre is a Poké Ball Pokémon in Super Smash Bros. Brawl. When it comes out of the Poké ball, it sprays water out of its mouth and tries to push opponents of the stage.

Kyogre made its first movie appearance in the ninth Pokémon movie, Pokémon Ranger and the Temple of the Sea. In the movie, Kyogre helps Ash, May, Pikachu and Manaphy to protect the Sea Temple and defeat The Phantom.

Kyogre with Groudon and Rayquaza in a cutscene in Pokémon Emerald 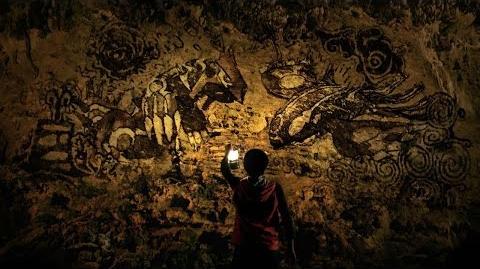