Start a Wiki
The Koopalings, sometimes referred as the Koopa Kids (not to be confused with Koopa Kid), are an elite seven member clan of siblings of Bowser's minions in the Mario series. Originally the Koopalings were depicted as Bowser's children, but in a 2012 interview with Shigeru Miyamoto, he stated the Koopalings are not his children and Bowser Jr. was Bowser's only child. Their current relationship with Bowser is yet unknown, as Bowser still treats them as well as he does with Bowser Jr.

The Koopalings debuted in Super Mario Bros. 3, where they took over the 7 kingdoms of Mushroom Land, invading it at full force with Bowser's troops. They transformed their rulers into animals (or in later versions, different versions of Mario characters). Each Koopaling was on their airship waiting patiently for Mario to arrive. Unsurprisingly, Mario defeated Bowser's seven minions, and learns that Bowser kidnapped Princess Peach, and the Koopalings were used to distract Mario.

This time Bowser and his Koopalings invaded Dinosaur Land, the place where Yoshi's species live peacefully. Bowser gave a portion of earth to each Koopaling. The Yoshis were no match for the Koopalings, as they easily sealed them in eggs, and some even turned into babies, and spread them around the land, being most prominent in Star Road. At the same time, Mario, Luigi and Princess Peach wanted to go for a vacation to Dinosaur Land, and as they arrived in a hot-air balloon, Mario and Luigi found out about a new power-up called the Cape Feather and they used it and flew around a portion of Yoshi's Island. but when they returned, they noticed that Peach was kidnapped by Bowser, who by coincidence was in Dinosaur Land as well. The Mario Bros. then go for a new adventure, where they defeated Bowser's seven commanders and defeated Bowser himself. The seven Koopalings were defeated for good, as they suffered horrible demise.

A long time later, after countless events in the Mushroom and Beanbean Kingdom, Bowletta and Fawful decide to go back to Dark Land and takes Bowser's flying fortress. She started attacking the Beanbean Kingdom, and the Mario Bros. arrived into the fortress, known as Bowser Castle. Bowletta, who was ready to destroy the Mario Bros., called the seven Koopalings. The Mario Bros., though, defeated the Seven Koopalings all over again. Three of them (Roy, Wendy and Larry) has a time bomb. If a certain number of turns passed, the Mario Bros. would die instantly. For unknown reasons, the Koopalings had no dialogue, and acted like regular monsters.

The Koopalings reprise their role as Bowser’s minions, kidnapping Princess Peach with a giant arm and kicking out Toadette, Toad, and the Mario Bros. They return as periodical bosses located at the end of each stage. In the end, they are replaced by Bowser as the final boss.

The Koopalings appears as mini-bosses for each of the seven worlds bar the secret levels. Each has individual powers provided by Kamek (such as Lemmy being able to shoot magic from a wand). They also aid in the initial cutscene and kidnap of Princess Peach in the prologue of the game. They proceed to kick Mario, Luigi, and the Toads out of the castle.

Additionally, the seven original Koopalings were set to appear in Super Princess Peach but were cut from the final game for unknown reasons. A few also have lookalikes throughout the series, such as Roy appearing as Boom Boom. In a few occasions, such as New Super Mario Bros. DS, the Koopalings were set to appear but are later replaced by Bowser Jr. Some speculate that they were also intended for Super Mario Odyssey but were changed to Broodals in development.

The names of the Koopalings in The Adventures of Super Mario Bros. 3 and Super Mario World, two television shows, were changed. This was because the cartoon was in development before the game was officially released worldwide. The names for them were Cheatsy (Larry), Big Mouth (Morton), Kootie Pie (Wendy), Hop (Iggy), Bully (Roy), Hip (Lemmy), and Kooky (Ludwig). All Koopalings appeared in "Crimes R Us" and "7 Continents for 7 Koopas".

The Koopalings in Super Mario Bros. 3.

The Koopalings in Super Mario World. 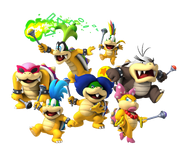 Mario Kart 8
Add a photo to this gallery

Retrieved from "https://nintendo.fandom.com/wiki/Koopalings?oldid=512479"
Community content is available under CC-BY-SA unless otherwise noted.