The Koopa Troop (also known as the Koopa Clan, Bowser Baddies, Koopa Pack in The Super Mario Bros. Super Show!, Turtle Tribe,[1], Koopa Corps, Team Bowser, or simply the Koopa) is an alliance led by King Bowser Koopa, and they serve as his armed forces. The Koopa Troop has taken over the Mushroom Kingdom multiple times and has even attempted to take over the universe. According to Kammy Koopa in Paper Mario, the motive for the clan is to seek revenge against all who have treated Koopa Troopas poorly, though many of their goals are based entirely on Bowser's own interests. Not all the members of the troop are Koopas, although they serve as the majority of the members and also have high-ranking roles. According to official Japanese character books, the army is led by the Turtle Tribe, with older material indicating the members of Bowser's Royal Family as leaders. In both the Super Mario Pia and the Encyclopedia Super Mario Bros. the Royal Family term is missing, and in general the organization of Bowser's army is no longer explained, with the former reconfirming that the Turtle Tribe still leads it. As proven in New Super Mario Bros., Mario + Rabbids Kingdom Battle, and Mario & Luigi: Bowser's Inside Story + Bowser Jr.'s Journey, when Bowser is absent, his son takes leadership of the Koopa Troop.

The Koopa forces differ from game to game, though Goombas and Koopa Troopas are consistently among the most common, and Magikoopas, Hammer Bros., and Koopatrols are usually among their elites.

During Super Mario RPG: Legend of the Seven Stars, Bowser's Keep is invaded by the Smithy Gang via Exor. By the time Bowser is met at Booster Tower, there are no more remaining Koopa Troopers by his side. He claims that Mario, Mallow, and Geno are active members when he joins the party (although it is heavily implied that he did this so he can avoid the humiliation of having to ask for their help).

The Koopa Troop plays varying roles in the Paper Mario series. In particular, during the events of the first game, Bowser dispatched the Koopa Troop to halt Mario's attempts at restoring the Star Spirits. Aside from this, they also engaged in some side-activities such as holding a game show, with Peach acting as a contestant, and one Goomba even managed to use the castle armory as a makeshift shop for Mario and his party. In Paper Mario: The Thousand-Year Door, Bowser summons the Koopa Troop to confront the X-Nauts led by Lord Crump in Twilight Town, as the latter was trying to find the Superbombomb. This quickly turned largely to fighting over the Crystal Stars, however, with the conflict ending abruptly soon after; when the Superbombomb failed to detonate upon hitting Bowser, he then unleashed a plume of flame breath that inadvertently set it off and wiped out both sides.

In Super Paper Mario, Bowser gives a morale-raising speech as part of preparations to invade Peach's castle, completely unaware that she had already been abducted by an unknown third party until the Mario Bros. confront and accuse him of kidnapping her. However, neither he nor the rest of the troop could act on this information before the one responsible for her abduction, Count Bleck, proceeded to capture them as well as Luigi. The Koopa Troop later attended a "wedding" helmed by Count Bleck and his majordomo Nastasia, with Bowser eagerly wishing to marry Peach, while Peach was forced via hypnosis on Nastasia's part to accept the proposal. However, this turned out to have been done in order for Bleck to create the Chaos Heart to wipe out all existence due to grief. A Hammer Bro captain and Koopa Troopa named Private Koopa attempted to aid Peach in escaping while two Goombas (one named Gary) coerced Luigi into helping them escape; however, Nastasia thwarted the escape attempts by brainwashing the captain, Private, and Gary, while the other Goomba cowardly defected to her side. Although Peach ended up escaping due to unknown factors, Luigi was successfully brainwashed into becoming Mr. L by Nastasia. Bowser and presumably any Koopa Troop members who hadn't been brainwashed by Nastasia were then dispatched to the Bitlands, where they had a brief run-in with Mario and the escaped Peach. After being defeated in a brawl by his nemesis, Bowser agreed to aid Mario in stopping Count Bleck (as his plan of destroying all existence would obviously prevent any chance at Bowser conquering the world); he then had the Koopa Troop hold down the fort, although it was implied that they intended to use Bowser's departure to hold a party in his absence).

In Mario & Luigi: Superstar Saga, a group of troops which Bowser dubs the Bowser Baddies man the Koopa Cruiser. Bowser mistakes Luigi as an eager recruit, and takes him along Mario's quest to reclaim Princess Peach's voice from the Beanbean Kingdom, but the Baddies and their King are swiftly dealt with by Cackletta and Fawful. After Cackletta possesses Bowser's body, she takes control of his castle and the Koopa Troop to destroy the Beanbean Kingdom, but the Mario Bros. stop her. The Nintendo 3DS remake of the game, Mario & Luigi: Superstar Saga + Bowser's Minions, adds a story mode that focuses exclusively on Bowser's troops. In it, they are dubbed Bowser's Minions in the English localization. During this story mode, the troops, led by Captain Goomba, set out to reunite and recruit all the troop members, and eventually rescue Bowser. The remake also shows that Bowletta duped the Koopa Troop, including the Koopalings, into fighting for her and impeding the Mario Bros. by faking Bowser's return.

In Mario & Luigi: Partners in Time, the crew of the Koopa Cruiser make a second appearance.

In Mario & Luigi: Bowser's Inside Story, the Koopa Troop is shown to be split into different divisions (the Goomba unit, the Shy Guy unit, the Koopa unit, the Bob-omb unit and the Magikoopa unit), as evidenced when Fawful shows Bowser his captured soldiers. As Bowser rescues his soldiers, he is able to use them as Brawl Attacks, for example, using a squadron of Shy Guys to sling Bowser forward to the enemy. The remake of this game once again features a story mode where the minions are controlled, this time led by Bowser Jr., who sets out to cure the Koopa Troop of their own case of the Blorbs in Bowser's absence.

In The Super Mario Bros. Super Show!, the enemies under the command of King Koopa are often referred to as the Koopa Pack, although it seems to be used interchangeably between generic minions of King Koopa and a core group consisting of King Koopa, Mouser, Tryclyde, and a single Koopa Troopa. On one occasion, they also went by Koopa Troopers and Team Koopa. In the show, all of the members (except for King Koopa) are somewhat unintelligent. In Raiders of the Lost Mushroom, Mouser, Tryclyde, and Koopa Troopa said that stealing is wrong, which made King Koopa (or Kolonel von Koop as he was called) angrily hit them with a whip and say that bad guys are supposed to steal.

In Super Smash Bros. Brawl, the Koopa Troop forms part of the Subspace Army, commanded by Bowser, Ganondorf, and Wario. Although the group is led by Master Hand, it is later revealed the he is being used by Tabuu in order to trick the three commanders into enveloping the World of Trophies into Subspace.

On some occasions, Bowser has teamed up with others (such as Luigi in Super Paper Mario and Antasma in Mario & Luigi: Dream Team) to achieve a common goal, but in these instances, these characters are not considered part of the Koopa Troop. 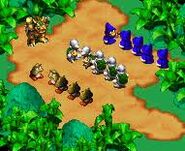 The Koopa Troop from Super Mario RPG: Legend of the Seven Stars.

The Koopa Troop from Paper Mario.

The koopa Troop from New Super Mario Bros.
Add a photo to this gallery

Retrieved from "https://nintendo.fandom.com/wiki/Koopa_Troop?oldid=548559"
Community content is available under CC-BY-SA unless otherwise noted.