Kongo Jungle (also known as Jungle World or Jungle[1]) is a jungle-themed world found on Donkey Kong Island which is the home to the Kong Family. It appears numerous times in the Donkey Kong series beginning with Donkey Kong Country. It appearance changes each time it is presented. In all its different forms, Kongo Jungle always takes the look of a huge, dense jungle. The boss of this location is a giant Gnawty called Very Gnawty. 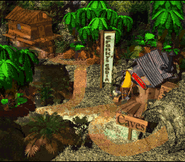 The first half of Kongo Jungle. 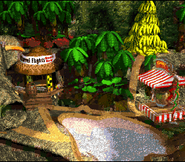 The second half of Kongo Jungle.

Donkey Kong Country Returns.
Add a photo to this gallery

Retrieved from "https://nintendo.fandom.com/wiki/Kongo_Jungle?oldid=518131"
Community content is available under CC-BY-SA unless otherwise noted.