The Joy-Con Controllers are the primary controllers for the Nintendo Switch. With separate left and right variations, the controllers attach either to the sides of the Switch's screen or to the Joy-Con Grip. They each feature Wii/Wii U Remote-esque gyro/motion controls, HD Rumble, and an NFC reader amiibo support. The controllers have been criticized for the tendency of the analog sticks drifting. 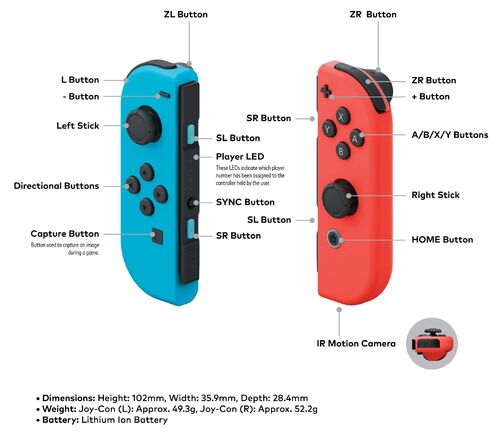 For on the go multiplayer, each Joy-Con can also be used separately as its own controller in a horizontal orientation in supported games.

Each Joy-Con has a single analog stick, four circular buttons in the traditional cross layout, two trigger buttons, and two additional buttons near the shorter-length ends of the unit and two shoulder buttons when held horizontally. The analog sticks are relatively small and have low travel compared to standard-sized analog sticks.

The specific features of each Joy-Con are as follows:

HD Rumble is Nintendo's brand of the haptic technology, known to have a more realistic rumble feel when interacting with certain elements of a game, such as shaking a glass of water.[1] It is implemented on the Nintendo Switch system for its Joy-Cons and the Pro Controllers. While various Switch video games support a more stable rumble, only a certain amount utilize the "HD" version. According to executive officer Yoshiaki Koizumi, he said that the feature was created to be used in Super Mario Odyssey, in which he produced.[2][3] 1-2-Switch is another game with a notable use of the feature.

It is developed in partnership with US-based Immersion Corporation.[4]

Joy-Con Drift has been an issue that many people have experienced, where the Joy-Con starts to have movement being detected despite them not actually moving analog stick. This was brought to the public attention with the filing of a US class-action lawsuit in July 2019.[5][6]