Iustitia is probably the most twisted Angel in appearance, being a sphere with multiple human adult head on it, child faced tentacles are comming out of the mouth of those heads, additionally, some plant-like tentacles can also be seen comming out of smaller heads covering its body. This appearance is due to Iustitia's very nature, it represent justice and life, life is represented by the child like tentacles comming out of the adults' mouth symbolizing the birth of new life, this aspect is also shown in its plant-like tentacles. Justice in itself is a very abstract concept compared to the other Cardinal Virtues since the notion of Justice change for every man, this may explain its incomprehensible appearance. Natural phenomenon such as earthquakes are often affiliated to this being. It is the source of inspiration for the Justice, a type of Angel made to represent the Virtue inspired by Iustitia itself.

Iustitia appears several times in Chapters IX and X as an unseen source to a large number of tentacles in Paradiso, usually destroying structures or just generally hindering Bayonetta's progress. It makes a more prominent appearance just after Bayonetta defeats the Sequi of the two previous Cardinal Virtue, Courage and Temperance, where it immediately slams one of its main tentacles onto the next island, making it spin, effectively hindering Bayonetta's progress.

Iustitia itself is the boss of chapter XI, where it fully reveals itself and challenges Bayonetta after damaging Cheshire, Cereza's stuffed cat. After its defeat, Iustitia reveal that a Lumen Sage is the cause to Bayonetta's troubles in Vigrid soon before being dragged to Inferno.

Iustitia appears as a mini boss in Chapter XIV, where it is fought in a Umbran Armor during the Great War, 500 years before the original Bayonetta. The fight end when Bayonetta activate the auto destruction command of the Umbran Armor, which make the massive Resplendence above them crash but leaving Iustitia in a pretty healthy state as it is still seen moving inside the explosion seemingly unharmed.

"Within Paradiso's Divine Will, also known as the Cardinal Virtues, Iustitia, or Justice, is known to take a particularly strange physical manifestation. A large mass covered with numerous faces, and extending outwards via countless tentacles, Iustitia could easily pass for a demon. This may be due to the fact that those depicting the angel are filled beyond comprehension with awe of the sheer difficulty of encouraging justice in the world. Among Paradiso's Divine Will, there are those who believe that Iustitia is the closest of the Cardinal Virtues to hell. Justice is said to be based upon rules established by man, to be followed by man, and changing one's viewpoint can lead to a change in what is evil. This uncertainty may be a manifestation of the existing folklore and depictions of Iustitia." 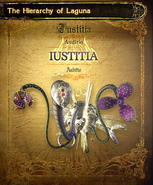 Iustitia's page in the Bayonetta 2 version of the Hierarchy of Laguna book.

Iustitia's card.
Add a photo to this gallery
Retrieved from "https://nintendo.fandom.com/wiki/Iustitia?oldid=527357"
Community content is available under CC-BY-SA unless otherwise noted.