Insidious, also known as the Consumer of All, is a Demon that has the appearance of a gigantic manta ray with a skull face covering most of its torso. Insidious is known to pass as an ark to trick sinners into boarding him only to have them fighting to the death in his insides to have a chance to escape while he creates demonic energy from their suffering. Insidious is also used as a warship by lesser Demons during large scale wars with Paradiso.

Insidious first appears during "Records of Time" where multiples are seen fighting Angels in the background. During a sequence, Bayonetta even fights a group of Beloved on the back of one while in an Umbran Armor only for the Demons to be sliced in two by a Valiance. Another Insidious eventually destroys the platform Bayonetta and the Valiance were fighting on with two laser beams fired from his eyes.

Insidious is officially introduced in "Chapter VII" where it tries to intercept Loki and Bayonetta on their way to Inferno. There Bayonetta fights Insidious by attacking the two eyes that are located into Insidious' wings. Insidious can fire a lot of projectiles to defend himself and even try to slam her with the tendrils surrounding the eyes or even by using the eyelids themselves.

After Bayonetta uses Madama Butterfly to rip one of Insidious' eyes out, Loki and the demon engage in a stalemate by firing energy beams at one another until Insidious' power falters and its other eye is destroyed, killing the demon. Though seeming to be beaten, another Insidious ambushes the two and swallows them alive. Bayonetta then tries to find Loki inside Insidious but runs into the Masked Lumen and has to fight him to protect Loki. Due to their battle, the Insidious' body is destroyed from the inside at the end of the chapter.

Another Insidious appears in "Chapter X" and carries both Bayonetta and Rodin to Alraune's castle. The two fights various Demons on the way there until Bayonetta notices that Jeanne's soul is inside the castle and immediatly jumps off the Demon's back. Insidious appears again during the Jet Fighter Assault section of Chapter XVI. This time both Balder and Bayonetta are working together to defeat it and after destroying both his eyes, he is destroyed by firing magical projectiles into his mouth.

"A hellish ark that, while seemingly leading sinners to the Garden of Eternal Pleasures at the end of the world, was in actuality abducting them to compete in a massive bloodbath. The souls who boarded Insidious were led nowhere. Surrounded by the stench of death and rotten flesh, they massacred each other, struggling over whatever morsels of food to be came across. With a unique organ in his body that converts death into demonic energy, Insidious always carries a tremendous amount of power. A myriad of hell's creatures live within his gut, making him useful as an assault ship during wars with Paradiso. If swallowed by Insidious, the only way to escape is to stand atop a tower of corpses and wait for him to open his jaw while he engorges with his next feeding. However, those who take pleasure in killing may find their true Garden of Eternal Pleasures within this demon's bowels." 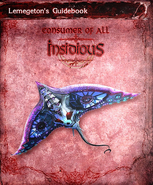 Insidious' page in Lemegeton' Book.
Add a photo to this gallery
Retrieved from "https://nintendo.fandom.com/wiki/Insidious?oldid=527345"
Community content is available under CC-BY-SA unless otherwise noted.