Romaji: Aisu Furawā) are item in the Mario series. When obtained, Mario becomes Ice Mario and can hurl out Ice Balls from his hands that can freeze many enemies during gameplay. Ice Flowers first appeared as a Bros. Item in Mario & Luigi: Partners in Time, and later in New Super Mario Bros. Wii and New Super Mario Bros. U, along with other games in the franchise where it has the same function. However, in Super Mario Galaxy, Mario or Luigi gains the ability to walk on and freeze water or lava when it is collected. They are the icy counterparts of Fire Flowers.

Ice Flowers make their official debut in Mario & Luigi: Partners in Time. The effects of an Ice Flower are similar to a Bro Flower, but they allow Mario, Luigi, Baby Mario, and Baby Luigi to shoot Ice Balls instead of Fireballs. Ice Flowers can randomly lower the enemies' Power, Defense, and/or Speed. Ice Flowers can also do extra damage to fire enemies, such as Blazing Shroobs, but they also do extra damage to Shroob enemies and bosses (with the exception of Princess Shroob), and to Bowser and Baby Bowser.

Ice Flowers reappear in Super Mario Galaxy, specifically in the Beach Bowl Galaxy, the Freezeflame Galaxy, and the Deep Dark Galaxy. Ice Flowers turn Mario into Ice Mario, which lets him cross water and lava by creating hexagonal platforms of ice wherever he steps on either surface. Additionally, instead of running, Mario can skate about the level, increasing his speed. The music accompanying the ability (which is the Fire Flower's theme played in higher notes) speeds up until the Ice Flower's effect ends, in effect serving as a timer.

The Ice Flower only appears in the Secret Star. The mission has the player collect a ? Coin, which spawns an Ice Flower. Upon grabbing it, the player then must quickly wall-jump up a series of waterfalls to get to the top of the island, where they must make a Cataquack follow them to the star's location, then have it hurl them into the star.

In The Frozen Peak of Baron Brrr, the player must use the power-up to jump on a series of fountains leading them to the boss arena, and then defeat Baron Brrr, who requires three spins to beat instead of one, unlike a Lil' Brr. Then, in Hot and Cold Collide, the flower is used at the end of the level to cross lava platforms to get to the star. An Ice Flower is also essential in the purple Coin mission Purple Coins on the Summit, as it is used in the same fashion as in the Baron Brrr mission.

The Ice Flower plays a minor role in Bubble Blastoff. First, the player must light three torches with a Fire Flower, and then an Ice Flower appears to jump on a few fountains with.

Ice Flowers reappear once more in New Super Mario Bros. Wii with the same look from Super Mario Galaxy. Unlike in Super Mario Galaxy, however, they function as they did in their debut game, allowing Mario, Luigi, Blue Toad and Yellow Toad to launch Ice Balls that can briefly freeze enemies and freeze large enemies for a second. They are often found in Towers and Castles. Yoshis can grab an Ice Ball thrown by another player or an Ice Bro. and spit it out as a bigger projectile.

Ice Flowers make a cameo appearance in Mario Party 9. In King Boo's Puzzle Attack, they are in the puzzle table among other items.

In Mario Tennis Open, Ice Flowers appear as the Ice Flower Cup emblem and its trophy, which has a different design. A tennis racket, uniform, wrist bands, and shoes are designed based on this item and are available for Miis to use.

Ice Flowers appear as stickers in Paper Mario: Sticker Star. When used, Mario is transformed into Ice Mario and hurls Ice Balls at any ground or low-altitude enemies, freezing them. If the attack depletes their HP, they shatter. This sticker also has two variants: the Shiny Ice Flower and the Flashy Ice Flower, which inflict more damage to enemies.

Ice Flowers return in Paper Mario: Color Splash taking the form of a card and keeping their appearance from the previous game. They come in normal and big variations, and are found since the very beginning of the game, first appearing in Ruddy Road. This time, if the enemy's color (or HP) depletes to 0, they will be covered in a ice cube before being shattered into pieces.

In Mario Golf: World Tour, Ice Flowers appear for item shots. They let the ball freeze terrain wherever it bounces (like in Super Mario Galaxy), letting players bypass water hazards. A golf ball and set of golf clubs are designed based on this item, and are available for use by Miis.

Although Ice Flowers do not appear in Mario Kart 8 and its port Mario Kart 8 Deluxe, they cameo as a stylized head and leaf on the posters and track-side banners of the sponsor 100% Organic Antifreeze.

Ice Flowers appear in Puzzle & Dragons: Super Mario Bros. Edition as Transformation items that allow the player to transform certain types of enemies into stronger forms. Ice Flowers can be obtained by opening ? Blocks, defeating Ice Bros. with a 10+ combo attack, or by winning them in the Lucky ? Blocks game at Toad Houses.

The Ice Flower appears in volume 36 of the Super Mario-Kun, which is adapted from Mario & Luigi: Partners in Time. It becomes Baby Luigi's primary form of offense. After Commander Shroob destroys the snowman Baby Luigi had built, Baby Luigi pulls out an Ice Flower from the snowman's remains and defeats Commander Shroob and his Support Shroobs, while accidentally freezing his other three allies. He then uses a Fire Flower to melt them, scorching Mario in the process.

Baby Luigi then later uses the Ice Flower against Mario, after the four characters were provoked by a Tanoomba masquerading as them. 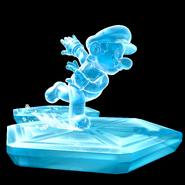 Retrieved from "https://nintendo.fandom.com/wiki/Ice_Flower?oldid=524145"
Community content is available under CC-BY-SA unless otherwise noted.