Meaning: Ice Climber), Popo (JPJapanese: ポポ) and Nana, a boy dressed in a blue Inuit parka and a girl dressed in a pink Inuit parka respectively, are the stars of the NES game Ice Climber. These two have always been pioneers and have scaled many icy mountains in their time. In their glory days they pursued a condor who, peculiarly, had possession of cucumbers, eggplants, and various other vegetables.

Popo is a young boy who has a blue Inuit parka. He has spiky hair that stops near his eyes. His parka's hood resembles the Freeze copy ability's hat.

Nana is a tomboyish girl who has a pink parka. Her parka's design matches that of her brother, but she has smoother hair that parts near the middle.

The Ice Climbers first appeared in Ice Climber where the two of them competed in climbing to the top of one of 32 different mountains. On their way they had to break blocks with their hammers to open up paths and ride on clouds on their way to the top. Also making their climb difficult was a number of animals that lived on the mountains. Topis wandered on the icy platforms and Nitpickers flew above them. Also, if the Ice Climbers spent too much time without moving on upwards, dangerous Polar Bears would appear, rolling the screen upward. At the top of the mountains the fastest Ice Climber got a chance to collect valuable vegetables and if they then reached the peak, a rare Condor could be grabbed for even more glory.

That's Popo in the blue and Nana in the pink. These two stars of the game Ice Climber have scaled many an icy summit in their mountaineering careers. Back in their glory days, they chased eggplants, cucumbers, and other vegetables that inexplicably fell from frosty summits when a condor reigned supreme. They're rarely seen apart.

This unique twosome fights together as a team. Your score will not be affected if the CPU-controlled character is KO's, but a lone Ice Climber won't be able to use teamwork moves, which will make for a tough and frantic solo fight. The Ice Shot fires mini-glaciers out of their hammers, while Squall Hammer is at its strongest when Nana and Popo combine their strength.

The colors of the Ice Climbers' parkas denotes who's in the lead: Nana's in pink or orange, while Popo's in green or blue. Their hairstyles are also slightly different. Belay allows them to cover great distances, but doesn't give foes the chance to target their landing. Blizzard is best used in close quarters; in the fray, Nana and Popo will sometimes freeze opponents.

The one in blue is Popo, and the one in pink is Nana. They use their incredible jumping powers and hammers to break blocks and climb to the summit. They grab veggies, and if they can catch the condor at the end, they conquer the mountain. Other than breaking blocks, their hammers are good for sending foes flying, climbing down from blocks, and destroying icicles.

The Ice Climbers' Final Smash. This giant ice mountain appears in the middle of a stage--it's incredibly slippery, so it's hard to control yourself when traversing it. In addition to being slick, this ice is also COLD, so opponents will take damage just from touching it. Attack the ice, and it will take damage and slowly shrink. Is it actually useful? That's a mystery.

This pair of adventurers starred in an action game released in 1985. Popo wears blue, and Nana wears red. The goal of their adventure was to reach the top of the mountain, collecting vegetables and defeating animals along the way. Grabbing the condor earned them a nice bonus too!

Popo (in blue) and Nana (in pink) are the daring adventurers from the two-player platformer Ice Climber, released in Europe in 1986. In that game, your goal is to head up a mountain, breaking blocks and taking out pesky critters along the way. When you get to the top, you can collect veg and grab on to the condor to get bonus points! Nice! 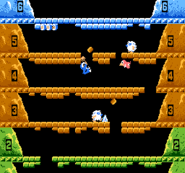 An image of Popo and Nana next to screenshots and box-art of Ice Climber.

Popo and Nana as they appear in Super Smash Bros. Melee.

Popo in Tetris DS.
Add a photo to this gallery

Retrieved from "https://nintendo.fandom.com/wiki/Ice_Climbers?oldid=528122"
Community content is available under CC-BY-SA unless otherwise noted.