Hyrule is the Name of Several kingdoms on different Continents of the world of the The Legend of Zelda series. It first appeared in The Legend of Zelda for the NES the 1980s, and has reappeared in most games of the series since then. Since the games takes place on a time frame that easily surpass 10,000 years between the first and last game in the timeline, Hyrule is depicted in very different states depending on the game with usually only a few landmarks being recognizable. Due to some events, certain Hyrule are not even the same as the original one, such as the New Hyrule from the Adult Timeline.

The Creation of Hyrule

Three Goddesses by the names of Din, Nayru, and Farore took it upon themselves to create a new world. Each infused their powers to create the new world, each with a unique ability. After the world had been created, they returned back to the heavens and gave responsibilities to the many races that they had created to uphold the laws of nature that they had developed. Upon leaving they left behind the Triforce to symbolize their utmost power, which contained three segments each representing a different quality including Power, Wisdom, and Courage. The one who would come in possession of the Triforce would have his or her wishes fulfilled, whether it be for good or for bad. The Triforce was left in the hands of another Goddess, Hylia who watched over the land of what in the early years of the world. The sacred land protected by the Goddess was what would eventually become Hyrule.

The War of the Demon King

After a period of peace, Demons started appearing from beneath the earth led by a powerful being named Demise who desired to obtain the power of the Gods for himself and rule the world. His hordes slaughtered many of the innocent creatures under Hylia's protection and she had to start a war against Demise. As a failsafe, she hid the Triforce inside the Statue of the Goddess and sent it into the sky with the defenseless Hylians. She also crafted a sword known as the Goddess Sword that was meant for her eventual Hero to recover in time of needs. She fought Demise and sealed him at the cost of her physical form. As she was dying, she decided to reincarnate in the land she sent into the sky to guide her hero on his quest to destroy Demise for good when the time would come.

The Hero was born as the first Link while Hylia was reborn as the first Zelda. Link reforged the Goddess Sword into the Master Sword throught trials and used his new strenght to reclaim the Triforce and wish Demise away. This worked until his servant, Ghirahim, traveled back in time to resurect him in the past. Link followed and defeated Demise in person. As his dying breath, the Demon cursed himself, Zelda and Link to be eternally bound to fight across the ages. Due to this, the land would eventually become plagued by an incarnation of Demise's hatred who would come to face a reincarnation of the first Link's spirit and Hylia's bloodline. Link and Zelda then welcomed back the habitants of the Sky on the Surface and the two created a new kingdom named Hyrule with Zelda's descendants as its rulers.

The battle for the Triforce

The many different races each upheld their responsibilities given to them by the goddesses. They each lived separately from one another, though for the most part were not enemies to one another, though contact was limited. The Hylians were the ones in power, though the other races had their own distinct qualities that bested those of the Hylians.

The location and the very existence of the Triforce and the Sacred Realm was known by few. The higher ups in the Hyrulian government knew of it, though they kept it a secret from other tribes to prevent civil war. Though word eventually got out and the various races across Hyrule would find of its existence, and almost automatically would attempt to gain its power. The first race to do so were the ones known as the Dark Interlopers. Their attempt to gain access to the Triforce brought fear into the other races. Ultimately in the end, the goddesses would punish the Dark Interlopers by banishing them to the world of the Twilight Realm.

The other races across Hyrule eventually would want the Triforce for themselves, each one having mixed reasons. Some wanted the Triforce to simply keep it from those who desired it for evil, while others wished to abuse its power. A war broke out among the races, and one women who had just given birth fled to a secure area whose race was not willing to partake in the conflict: the Kokiri. The Kokiri Forest was hidden from the rest of the world, and the childlike race wasn't interested in the doings of the outside world. The guardian of the forest and of the species was Great Deku Tree. The women who brought the child to him died shortly thereafter due to battle wounds. Though the Great Deku Tree would raise him as a Kokiri. The child's name was Link, and he would become the savior of Hyrule.

As Link grew up, his true identity as a Hylian was unknown to him. The Great Deku Tree would wait for another time when he was old enough to tell him of his heritage. The Deku tree knew of the child's future, and his destiny to save the world from evil. He would let destiny take its course and would not inform Link of his future. The prophesy that was foretold ages ago came true when the Gerudo king with a heart full of darkness and the bearer of the Triforce of Power developed a desire for the Triforce. He decided to seek out the keys to open the Sacred Realm, which included three stones and the Ocarina of Time. The Great Deku Tree held within him one of the Spiritual Stones, and refused Ganondorf access to it. Enraged, Ganondorf set a curse on the tree which would claim his life. In his final words, the Great Deku Tree told Link of his future, and that he was required to take the Spiritual Stone to Hyrule Castle Town.

Hyrule is presented as a federal monarchy centered around the belief of divine right. This means that Hyrule is more often than not a decentralized country where independant monarchs of different species rule certain regions. The actual leader of the country is the Hylian king, which is recognized as the highest authority in the kingdom due to them being descended of the Goddess Hylia. This is a list of all known rulers of Hyrule by chronological orders as well as their roles in the kingdom's history.

End of the Timelines 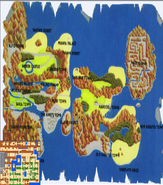 Kindom of Hyrule as it was portrayed in the first two The Legend of Zelda games. 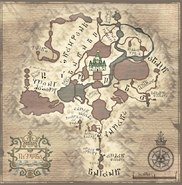 Hyrule map as seen in The Legend of Zelda: Twilight Princess.

Map of Hyrule from The Legend of Zelda: Ocarina of Time.
Add a photo to this gallery

Retrieved from "https://nintendo.fandom.com/wiki/Hyrule?oldid=531262"
Community content is available under CC-BY-SA unless otherwise noted.