Hydra, also known as the Spinner of Destiny, is a Demon that appears as a large head-like creature with multiple snakes comming out of her head in the place where her hairs would be. She is one of Bayonetta's summons. Hydra used to be a young woman but was sent into Inferno for the sins of her sister and reincarnated into the monstruous Hydra. Hydra lost her humanity long agoo and now can only brutally attack the ones she sees as her enemies.

Hydra first appears in Chapter VI where it is summoned to finsh Valor off after its fight against Bayonetta. Valor manages to destroy some of Hydra's fake snake heads however and send Bayonetta and Loki further down, essentially obstructing their progress toward Fimbulventr.

Hydra is summoned once again during the second fight against the Masked Lumen to oppose Sapientia. The two clash in the river of blood created by the damage caused to Insidious' insides. During the fight, Bayonetta can counter the Masked Lumen and send him toward one of Hydra's head which will catch him in its maw before spewing him out in the air and strike him with its head blade. At the end of the fight, the Lumen Sages uses Sapientia's angelic missiles to reach Bayonetta but Hydra deflects them with a scream and start rushing toward Sapientia. Sapientia uses its lasers but Hydra deflects them with her head blades, which damages Insidious to the point where it explodes from the inside.

Hydra appears one last time at the end of the final Loptr fight where Bayonetta tries to summon both Labolas and Hydra to stop him. Loptr easily dispatches both Demons however and manage to neutralize Bayonetta.

Outside of the story, Hydra appears in the Umbran Climax of Love is Blue, Undine and Alruna. Hydra is also the Demon to performs the Torture Attack against Sloth.

""A once beautiful maiden who was banished to hell for the sins of her younger sister and mutilated into a snakelike monster with seven heads.

Her human heart has long since been lost, and she viciously attacks anything she deems an enemy. Those trapped by her seven heads must suffer slow, painful deaths.

Out of her many heads, only one is real; slicing off any of the others will not amount to much more than a scratch." 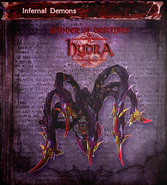 Hydra's page in the Book of Infernal Demons.
Add a photo to this gallery
Retrieved from "https://nintendo.fandom.com/wiki/Hydra?oldid=527353"
Community content is available under CC-BY-SA unless otherwise noted.