Hooktail is a dragon featured in Paper Mario: The Thousand-Year Door. She resides in Hooktail Castle, and serves as the boss of Chapter 1.

Hooktail is a large red dragon, with a cream-colored underside, jaw, and cheeks. She has small red-and-purple wings on her back, and antennae resembling ponytails on her head. She has large red feet with purple claws, and her tail is light purple, thin, and forked into three parts.

As explained by the residents there, Hooktail terrorized Petalburg for a long time, devouring many of its residents. Those who tried to stop her were ultimately devoured as well, including Kolorado's father and Koopley. However, her victims discovered that her weakness was cricket chirps, noting that she became nauseated and weakened upon hearing them.

When Mario visited the Thousand-Year Door and held the Magical Map aloft, the map revealed that the Diamond Star was located in Hooktail Castle. After progressing through it, it is revealed that Hooktail is the guardian of the Crystal Star, and Mario battles her to retrieve it. Wearing the Attack FX R badge in the battle against her will progressively weaken her attacks, making the battle much easier.

Upon defeat, she tries to bargain with the player. She at first offers 1,000 Coins, then a "Really Ultra Rare Badge", and finally a chance to sniff her feet. All three are false offers, and she will attack the player if they accept any of them. After this, she eats some of the audience members, healing her by 10 HP and causing the rest of the audience to run away. Mario then defeats her, and she coughs up the missing Koopley after fainting. He then rewards Mario with the Diamond Star, which was trapped inside her gut.

Hooktail also appeared in Super Mario-Kun in issue 32 of the series, the Paper Mario: The Thousand-Year Door issue. In it, she attacks Mario, Goombella, and Koops. As this manga is based on the original Japanese game, she gets weak by a frog's croak rather than a cricket's chirp.

Hooktail appears as a Sticker in the game Super Smash Bros. Brawl. The sticker is usable in The Subspace Emissary by every character and increases resistance to fire-based attacks by 36 points. 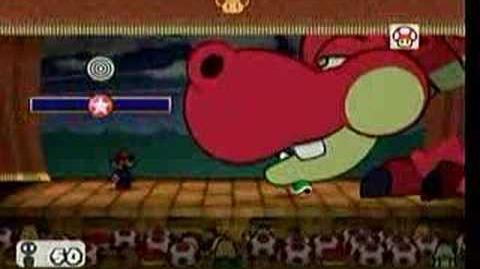