Hekatoncheir, also known as the Shatterer of the Earth is a gigantic six-armed Demon in the Bayonetta series. Appearing in both Bayonetta and Bayonetta 2, Hekatoncheir is one of the stronger Demon seen in the series but he is also known to be proportionally simple minded.

Hekatoncheir is first summoned during Chapter VII where it is used to tear off both of Temperantia's arms before beating the Angel into submission. Hekatoncheir is then summoned to finish off the two Golems in chapters IX and XV.

Hekatoncheir appears once again when Bayonetta finish off the Golem fought in Chapter IX. Rosa also summons it during Chapter XIV to hold Sapientia in place allowing Bayonetta to proceed before punching the Angel out of sight.

"A giant endowed with six fearsome arms capable of pulverizing mountains, those unfortunate enough to fall underfoot of the demon are subject to days-long violent earthquakes. Lacking knowledge, but brimming with brutality, it is said that even the most powerful of conjurers should take heed of the danger this beast presents." 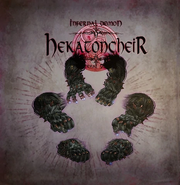 Hekatoncheir's page in the Infernal Book of Demons in Bayonetta. 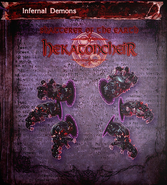 Hekatoncheir's page in the Book of Infernal Demons in Bayonetta 2.
Add a photo to this gallery

Retrieved from "https://nintendo.fandom.com/wiki/Hekatoncheir?oldid=527352"
Community content is available under CC-BY-SA unless otherwise noted.