Heckran is a monster found in 1000 A.D. in Chrono Trigger. He is the "boss" enemy the player must defeat in Heckran Cave to get back to Truce after returning from acquiring the use of magic at The End of Time. Heckran is able to use Water-type magic but is also highly susceptible to it.

The Village of Magic

While journeying back to Truce from the Eastern continent, Crono and his party travel through Heckran Cave. Deep in the Cave, they eventually encounter Heckran himself. He is a Mystic that believes in Magus' plot to destroy humanity. After defeating the magic-using monster, Crono and his friends enter the magical pool of water that transports them to the Vortex Pit near Truce. 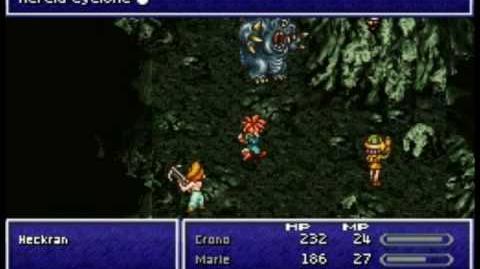