Hardin is first encountered in BS Fire Emblem, posing as a mysterious traveller, who opposes the behavior of the Macedonian deserters Seeing an opportunity to help his country, he joins forces with Princess Minerva of Macedon, and routes the enemy deserters. After he parts with Minerva, he thinks to himself about how Minerva surpassed his expectations as a beautiful and honorable commander.

As the conflict continues, he takes part in a plan to rescue Princess Nyna from the Dolhr soldiers. As General Camus fought against the continuous enemy reinforcements, Hardin took Nyna away from the battlefield. As they left the battle, Hardin vowed to protect Nyna with his life.

As time past, the Macedon army continued to devastate the forces of the Aurelian army. Knowing that defeat was a serious possibility, Nyna and Hardin sent out a message requesting help from all those who wished to defeat the Macedonians. There cry for help was eventually answered, and Prince Marth of Altea, arrived to join forces with Hardin and Nyna. Hardin found a like minded spirit in Marth, and together they defeated the Macedonian occupation, and continued to fight against Medeus and the Dolhr army.

With the war over, the desire to rebuild Archanea was very strong, and Nyna's advisor Boah demanded that Nyna get married as soon as possible. With only allied nobles suitable for the role of king, Boah gave Nyna a choice between Marth and Hardin. Nyna was fully aware of Caeda's affection towards Marth, thus she decided to offer her hand in marriage to Prince Hardin. Hardin was thrilled to be with his beloved Nyna, but unfortunately she was still in love with the late General Camus of Grust. The man who spared her life, but participated in the destruction of Archanea. When Hardin discovered that Nyna did not love him, he was heart broken and locked himself away in his chambers. Only when a mysterious merchant appeared who offered Hardin a magical gem to heal his pain would he come out. This merchant happened to be the revived dark wizard Gharnef, and he used his Darksphere to corrupt Hardin's soul, and turn him into a puppet for his revenge against Marth.

Hardin launched furious assaults against the nations which had helped Medeus in the previous war. He attacked Grust, and destroyed the resistance army led by General Lorenz, and placed his own corrupt General Lang in charge. He then turned his attention to Macedon, and helped General Ryuke launch a coup against his friend, Princess Minerva. He placed Princess Sheema on the Gra throne to use as a pawn against the Alteans. As these events happened, he sent Marth on a mission to bring order to Archanea, but he secretly invaded Altea, and destroyed the kingdom.

Once Marth discovered Hardin's treachery, he was declared an enemy of Archanea, and sentenced to death as a war criminal. Marth soon turned to the Arch Sage Gotoh, to find out about why Hardin had suddenly turned so treacherous. There he learned about how the Darksphere had poisoned the couragous and just heart of his old friend. Gotoh tasked Marth with using the Lightsphere to destroy the influence of the Darksphere. As Marth returned to Archanea, a rebellion had broken out in Archanea, as Midia and faced off against Hardin and his allies. Midia proved to be no match against Hardin, and was taken prisoner to be executed for treason. Marth and his allies finally laid siege to the palace, and discovered Boah, mortally wounded from fighting Hardin. He told Marth about how Hardin was twisted by the influence of Gharnef, and took responsibility for the war. He asked Marth to rescue Nyna from Gharnef, and return peace to Archanea. Marth and his allies then engaged Hardin in battle. Using the power of the Lightsphere, Marth and his allies were able to overcome Hardin, and end the war between Altea and Archanea. As he died, Hardin apologized to Marth, and told him to protect Nyna, the love of his life.

In Fire Emblem: Awakening, Hardin appears as Spotpass character, in his Dark Emperor form. Due to the lack of an Emperor class, Hardin appears as a General. Hardin also has two Bow Knights and two Paladins on his team, representing his subordinates, Wolf, Sedgar, Vyland, and Roshea.

Hardin, Coyote of the Aurelis Plains 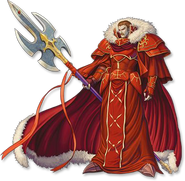 Emperor Hardin Official Art
Add a photo to this gallery
Retrieved from "https://nintendo.fandom.com/wiki/Hardin?oldid=277163"
Community content is available under CC-BY-SA unless otherwise noted.