Grub-dogs are the most common and well-known of the enemies in the Pikmin series. They comprise many species and can be found in all areas of the Pikmin games. The methods needed to attack and defeat them are as varied as the environments they inhabit. It is often necessary to hand select Pikmin squads to attack Bulborbs. The large size of Bulborbs and their ferocious nature necessitates careful planning when attacking. Most Bulborbs (except the Emperor Bulblax, Spotty Bulbear (In Pikmin 2) and Water Dumple) are nocturnal and as such can be found sleeping. Emperor Bulblax spend their time in the ground with their eyes open, watching actively for Pikmin, only ever emerging to devour their food. Spotty Bulbears can be found wandering set patrols and will actively hunt Pikmin groups, often trailed by Dwarf Spotty Bulbears. Water Dumples spend their time in damp areas and will actively chase and hunt down Pikmin that come near.

Bulborb Larva/Oculus bambini
Bulborb larvae are only seen during encounters with the Empress Bulblax. These newborn Grub-Dogs emerge from the Empress Bulblax's abdomen and crawl their way towards food, namely, Pikmin. The only way the larvae attack is by biting at Pikmin. Though they don't appear threatening, they are very dangerous in groups, in which they are normally found. Even one alone can be very dangerous to a Pikmin, as they can swallow a Pikmin as soon as they bite one. They are easily beaten by simple Pikmin attacks or even rolled upon by the Empress Bulbax, and even the player-controlled captains can attack and defeat them. These creatures only make an appearance in Pikmin 2. Interestingly, the Larvae belong to a different species than their "mother".

Dwarf Bulbear/Oculus terribilis
The Dwarf Bulbear is the only Dwarf that is an actual member of the Grub Dog family, the Dwarf Bulbear appears in both Pikmin games. However, in the first game, it was simply a companion species to the Dwarf Red Bulborb. In the second game, however, the Dwarf Bulbear patrols areas with Spotty Bulbears, a behavior completely different from that of the first Pikmin game. When alone, it notices Pikmin faster than other Dwarf Bulborb species. If a Dwarf Bulbear is alone and sees a Spotty Bulbear on patrol, it will join the Bulbear and follow its food patrol route. It cannot regenerate health like a grown Bulbear. It will also pursue Pikmin carrying treasure single-mindedly even back to the onion or the ship. In Pikmin, the player can see Dwarf Bulbears rocking back and forth happily and moving their mouths, as if in song, although nothing can be heard. The Dwarf Bulbear could also do a flip if attacked by Olimar alone.

Fiery Bulblax/Oculus vulcanus
The Fiery Bulblax is a strong Bulborb with a flammable waxy coating on its back. This makes it immediately deadly to all but red Pikmin. However, if the creature can be lured into the water, its fire will be extinguished, which is a prime time to attack. Then again, blues are the only ones invulnerable to water. The creature appears only in Pikmin 2, and even then quite rarely.

Whiptongue Bulborb/
Whiptongue Bulborbs are a new species discovered in Pikmin 3. They feature the characteristic rounded body and bulbous stalk-eyes, as well as the simple color pattern (this one having a brown head, beige, abdomen, and brown spots), but they are different from their many terrestrial cousins in that they have a long, anteater-like snout instead of a large maw. The creature's snout houses it's whip-like tongue, hence its name. It lashes its tongue out violently to ensure pikmin, then pulls them in and does a very brief animation of licking its chops and swallowing. The long tongue gives the creature a ranged-attacked, which could make it a difficult foe to defeat.

Hairy Bulborb/Oculus kageyamii folliculus
A rare variation of grub-dog, the nocturnal Hairy Bulborb spends most of its time sleeping in underground caves and tunnels. Somewhat strange looking, the Hairy Bulborb is completely white and its tail-end is covered with thick white hair. The hairy Bulborb is best suited for arctic and winter conditions and is well protected from the cold. The Hairy Bulborb is very high-strung and loses all of its soft, fuzzy hair within moments of being startled awake from its slumber. If left alone, the hair will regrow almost as quickly. Similar to the Red Bulborb, the Hairy Bulborb uses its large mandibles to gain advantage over its prey, Pikmin. It also resembles a snow bulborb once it has been injured. It appears only in Pikmin 2.

Orange Bulborb/Oculus kageyamii orangium
The Orange Bulborb is a nocturnal creature that prefers to spend most of its time sleeping in underground caves and tunnels, though it does appear, on seldom occasions, above ground. The most dangerous of all Grub-Dogs, (except arguably the Spotty Bulbear) the Orange Bulborb is a light sleeper and quick on its feet, and awakens and mounts a counterattack three times as fast as all other Bulborb species. It will awaken if the player approaches it, making it harder to ambush. Like all other Grub-Dogs, the Orange Bulborb uses its large mouth for primary defense, and head to head engagement will often result in disaster for the attacking party. The most efficient way to defeat these Bulborbs is to throw Pikmin onto its backside in the brief window while it cannot counterattack. Another recommened way to defeat them is to stun them with Purple Pikmin before they get on their feet. It appears only in Pikmin 2.

Red Bulborb/Oculus kageyamii russes
The Red Bulborb, initially known as the Spotty Bulborb ('spä-tē 'bûl-bôrb) in the first Pikmin game, is the most common Bulborb in the Grub-Dog family and is also a highly nocturnal creature, preferring to sleep during the day. Red Bulborbs usually prey on smaller creatures, such as Pikmin, and have a large advantage over their tiny victims due to their large mouth. Red Bulborbs are capable of swallowing several Pikmin at once. The easiest way to defeat these creatures is to attack them from behind with a large group of Pikmin while they are sleeping. Fortunately, their reaction time is slow and it is possible to kill them before they have a chance to wake up and begin a counterattack. Also, cooperation between Bulborbs, even among members of the same species, is nonexistent. This allows much more leeway in planning a strategy to defeat them, no matter in how large a group they live. However, if one Bulborb cries in distress, others will come to attack Pikmin, although their interest seems to be more in feeding than in community protection.

This species appears in both games, and as one of the more recognizable creatures from the Pikmin series, it can be found outside of the Pikmin games. One can see a Red Bulborb in the shops in all versions of Nintendogs.

Spotty Bulbear / Oculus terribilis spotticum
The Spotty Bulbear is the most aggressive of the Bulborb species. It, along with the Emperor Bulblax, and the Water Dumple are the only Grub Dogs that are diurnal. In the original Pikmin game, they however, like the Red Bulborb, seemed nocturnal and had angry glowing eyes if provoked from their slumbers. It was later revealed in Pikmin 2 that these species were merely hibernating from the cold winter and are once again active for the hunt with their original blue eyes. They roam strict patrol routes in search of any viable prey, and quickly attack and consume them. They are closely followed by Dwarf Bulbears that they pick up along their route. They are also the only enemies in the Pikmin universe besides the Gatling Groink that do not truly die at 0 HP, and can regenerate health in Pikmin 2. However, if you kill it while it is petrified by an Ultra-Bitter Spray, it will not regenerate.

Eye-Stalker Bulbeel / Oculus Voraxa
The Eye-Stalker Bulbeel is a long and legless Grub-Dog that lives in water and wait for its prey to come in eyesight before rushing to it with the mouth wide open may it be a prey or something inedible.

Water Dumple / Ichthyosa felinis
The Water Dumple is a legless Grub-Dog and cousin of the Bulborb. It lives in water, although it can make short ventures onto land to attack and eat Pikmin. They have recently adapted to their aquatic environment. They are very voracious, and will continue to eat Pikmin rather than defend themselves from attack, although their rapid feeding often constitutes a formidable defense. Louie notes that they have delicious caviar, which means they lay eggs, unlike their bulborb cousins.

Empress Bulblax/Oculus matriarcha
The Empress Bulblax looks like an ordinary Bulborb, but has a very inflated egg sac. Acting as a queen, she ceaselessly gives birth to Bulborb Larvae. As a defense mechanism, the Empress Bulblax rolls from side to side, using its massive girth to crush anything which may be beside it. The creature appears only in Pikmin 2. The reproductive system of Bulborbs is not known, and no information is easily inferred from the game. Interestingly, the Empress Bulblax is the only member of the Bulborb family that does not eat Pikmin, however, its larvae do. When an Empress Bulblax is defeated, its egg sac explodes and only the head remains.

Emperor Bulblax/Oculus supremus
The Emperor Bulblax, one of the largest members of the grub-dog family, is normally found buried in the ground, with only the stalks of its eyes exposed. This camouflage allows the predator to surprise the smaller creatures and use its long, adhesive tongue to capture prey. The thick hide and angular hump give the organism a distinct rock-like appearance. In the first Pikmin game, an Emperor Bulblax guards the final ship part and is thus, the game's final boss. However, in Pikmin 2, the Emperor Bulblax is much smaller, is much quicker to kill and never jumps very high but are much more common, appearing several times. The big bombrocks hurt a whole lot more than the little bombrocks. 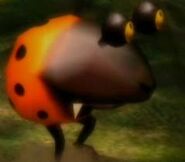 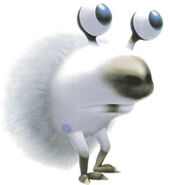 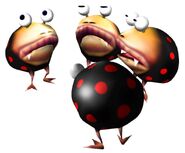 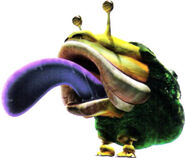 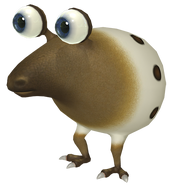 Whiptongue Bulborb.
Add a photo to this gallery
Retrieved from "https://nintendo.fandom.com/wiki/Grub-Dog_Family?oldid=517855"
Community content is available under CC-BY-SA unless otherwise noted.