Gomorrah, also known as the Devourer of the Divine are dragon-like Infernal Demons that mainly serves as the primary summon in Bayonetta and as the first boss in Bayonetta 2. As their name implies, Gomorrah likes to devours any Angel that gets to close to him but he also seems to attack anything without really thinking about it as they are extremely territorial and can't even be around other demons without trying to kill them.

"A monstrous creature hailing from the demonic wood, Johnson Forest. Taking the form of a dragon, it is incredibly fierce, identifying all that moves as game and devouring its prey. Territorial, it is most likely to be found alone."

Gomorrah is one of the most used summon in the game and the first outside of Madama Butterfly that is actually used in combat. He is usually summoned against Beloved but Bayonetta also summons him against Balder, which only result in Gomorrah's defeat.

In Bayonetta 2, it is the first Demon to turn against Bayonetta after the balance of the Trinity of Realities is lost as a result of the disappearance of the Right Eye of the Eyes of the World and it also serves as the boss of the prologue where it is the one who separate Jeanne's soul from her body, which leads her to be draged to Inferno. It is then defeated by Bayonetta who summons Labolas to kill it. Other Gomorrah are also found in Inferno where they try to block Bayonetta's path due to their territorial natures but Bayonetta just ignore them and dodge their attacks while continuing on her journey. Gomorrah is then summoned by Jeanne to destroy Loptr's physical form at the end of the game.

Gomorrah appears as part of Infernal Climax, Bayonetta's Final Smash where it will devour any fighters that where hit to fill the Climax Gauge during Witch Time. All targeted fighters with more than 100% damage will be KO'd. Like all other characters featured in final Smashes, Gomorrah is in the trophy of said final smash. 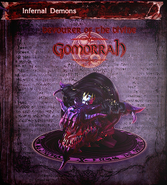 Gomorrah's Page.
Add a photo to this gallery
Retrieved from "https://nintendo.fandom.com/wiki/Gomorrah?oldid=520680"
Community content is available under CC-BY-SA unless otherwise noted.