The Golden Hammer is an item used in various video games. It hails from the Mario series, coming from the game Wrecking Crew.

According to the Smash Bros. DOJO!! site, the Golden Hammer has its malfunctions, like the previous Hammer; although, instead of losing its head, it sometimes becomes the Golden Squeaky Hammer.

The Golden Hammer is also seen in the Paper Mario series, as the Ultra Hammer.

In Brawl, it as a reward can be used to unlock things that would otherwise require a task to acquire. Certain boxes cannot be opened this way. It is also a trophy. 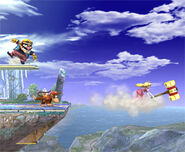 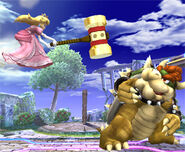 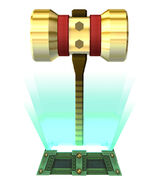 Add a photo to this gallery
Retrieved from "https://nintendo.fandom.com/wiki/Golden_Hammer?oldid=305561"
Community content is available under CC-BY-SA unless otherwise noted.