Gold Bone is the main antagonist and final boss of Mii Force and the leader of the Gold Bone Gang.

Gold Bone first appears in the intro, where he announces that he and the Gold Bone Gang are the new rulers of the StreetPass galaxy, and than flies off in his battleship (which is called Goldie VII) to Planet Leisura. He will also attack the player after the player has reached the end of Planet Leisura's 3rd stage inside a circular ship with a force field around it, however, the player can aim through openings in the force field with Piercing Lazer to damage him, or use another weapon to destroy sides of the force field. When he is defeated, the ship will start to go haywire and retreat back to Goldie VII.

He reappears in the Planet Leisura ending cutscene, where he gets angry at one of his crew members on Goldie VII about the invasion failing and that most of the crew members were still on the Planet for "shore leave", but than decides to take over both Planet Roohin and Planet Amyzua at the same time (both of which were implied by the crew member) and tells the crew member to set sail to both planets. Despite the fact that the crew member disagreed on the idea.

Gold Bone's next appearance is before the battle against Queen Jasmine in Slitherstone Ruins, where he tells the player that she was Planet Roohin's "treasure" and than sics her on the player. His next appearance is in Roohin's ending cutscene, where he once again gets angry at a crew member, this time about the treasure not being treasure. It is also implied by the crew member that Gold Bone is the one responsible for making Queen Jasmine grow from her seed, Gold Bone mistook her seed for a jewel, making him excited and sweaty, however, the seed soaked up the sweat, making Queen Jasmine rapidly grow out of it.

Gold Bone's next appearance is after the defeat of Skully on the Bone Rattler, where he is shocked by Skully's defeat, but than orders Skully to return to Goldie VII and be put on deck swabbing duty. In the ending cutscene for Planet Amyzua, he is seen complaining about the loss of the money gained from all the stuff the Gold Bone Gang had set up when they had took over, but than gets angry at yet another crew member over the loss of a statue of himself. Gold Bone than decides to attack Planet Aquatis next for the treasure located there.

Gold Bone reappears in his ship from Planet Leisura at the end of the base's 2nd stage in GB-1 Central Core, and once again attacks the player inside his ship. However, this battle is much harder than the one on Planet Leisura because there are much more plasma balls that Gold Bone uses than before, however the player can still aim through the force field with Piercing Lazer or use other weapons to break the force field. When he is defeated, the ship will once again go haywire, but this time Gold Bone orders Ahuy to bring him back inside Goldie VII instead of just flying back himself.

Gold Bone's final appearance is at the end of Goldie VII, where he asks another crew member if the frontal cannon (reffered to as the hyper goldenater plasma ray) is charged up yet, the crew member tells him yes and that there are 3 beams ready to fire. However, feeling confident, Gold Bone orders to fire only two large beams instead. However after the second beam, Gold Bone says that he has only one shot left, but "third time's the charm". However, the cannon suddently shuts down just before firing, confused, Gold Bone asks why it isn't firing. A crew member than admits he drained the power of the third shot to charge the second shot. Furious, Gold Bone flies out of Goldie VII inside his ship, along with the parts of his giant robot known as Robo-Bone, after having it's parts self assemble, Gold Bone flies into an opening in the center with his ship, attaching it to Robo-Bone and covering the opening. In this battle, Gold Bone can crush the player with Robo-Bone's hands, shoot homing waves of plasma at the player, and more. When he is defeated inside Robo-Bone, a large series of explosions will occur from Robo-Bone before a large one bigger than any other explosion in the game, apparently destroying Gold Bone, it's unknown whether or not he survived, but it is a possibility, because he had one last line of dialogue during the explosion. 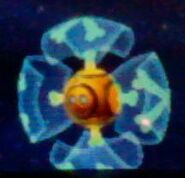 Gold Bone in his ship.

Gold Bone with one of his crew members. 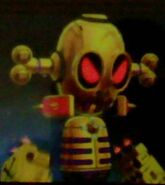 Gold Bone piloting Robo-Bone.
Add a photo to this gallery

Retrieved from "https://nintendo.fandom.com/wiki/Gold_Bone?oldid=502738"
Community content is available under CC-BY-SA unless otherwise noted.