Glamor are first sphere Seraphim which are on the top of the hierarchy of Laguna, the chain of command of the Angels of Paradiso. They take the form of a long flying serpent-like dragon and are the closest Angels to Jubileus, The Creator, they are said to never appear before regular humans and can only be contacted by Lumen Sages or Umbra Witches.

Glamor is first seen in the prologue where it destroy various buildings before slicing Bayonetta's jet. Glamor is then seen in chapter I where he came to take Loki, which it refers to as the "Sovereign one", and plan to take him to Loptr, which it refers to as the "Prophetic one". He is then fought in chapter III where it is helped by two other Glamors. after its defeat, it try to attack an Bayonetta with its projectiles while she is trying to catch a falling Loki. It is also fought as a mini-boss during the Jetfighter Assault portion of chapter XVI. Once it is defeated in chapter III, its card will be unlocked in the Tag Climax mode.

"Glamor, as a First Sphere Seraph, rests at the highest rank in the angelic hierarchy. Seraphim are the closest beings to God in existence and cannot be seen by humans in the physical world under any circumstances. Yet, since the dawn of history, there have been discoveries of statues depicting a six-winged snake traversing the heavens. Most likely these have some connection with The Book of Revelation, written by a Lumen Sage and found in the scriptures of Ithavoll. Of course, this means there must have been a sage capable of connecting to Paradiso and conversing with Glamor through spiritual means." 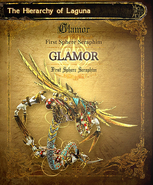 Glamor's page in the Hierarchy of Laguna book.
Add a photo to this gallery
Retrieved from "https://nintendo.fandom.com/wiki/Glamor?oldid=527359"
Community content is available under CC-BY-SA unless otherwise noted.