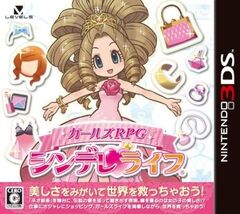 Girls RPG: Cinderella Life is a game for Nintendo 3DS. It is a game aimed at the female audience, and has not yet had an English release. The player takes the role of a castle hostess, who has to flirt with boys using their styles. It also looks like the player could be in danger because of various men in uniforms that seem to have tied their wrists together. They also earn butterflies at some point in the game, but it is unknown what for.

The game started as a 3DS version of Level-5's popular mobile title, Cabaret Girls. The name was changed to Girls' RPG to meet a younger demographic. The goal was also changed to getting a legendary lucky butterfly at the castle instead of becoming the best hostess. A few weeks prior to release, Level-5 changed the box art.

The game flopped hard, selling only 9,519 copies in its first week, which was less than a 3rd of its initial shipment. It likely flopped due to its awkward adult themes and kiddy aesthetics giving mixed messages.

Retrieved from "https://nintendo.fandom.com/wiki/Girls%27_RPG:_Cinderella_Life?oldid=333596"
Community content is available under CC-BY-SA unless otherwise noted.