Start a Wiki
A Game Card is a proprietary format of ROM cartridge used for the Nintendo DS, Nintendo DSi, Nintendo 3DS, and the Nintendo Switch; the name comes from the fact that the cartridges are based on the Secure Digital Card format, resulting in a small, flat shape reminiscent of a playing card. Game cards serve as a successor to the larger Game Paks utilized in the Game Boy line, the NES, SNES, and N64. Nintendo DS game cards use the serial code prefix "NTR" (referring to the Nintendo DS's codename "Nitro") while 3DS game cards use the serial code prefix "LNA" on the game label and "CTR" on the back of the cartridge. Nintendo game cards are manufactured by the Taiwanese company Macronix.

The Nintendo 3DS and New 3DS are backwards-compatible with DS & DSi game cards, but the latter two systems are incapable of running 3DS game cards. Additionally, DSi game cards cannot be run on the original DS due to them taking advantage of DSi features that the DS lacks. For the same reason, the original 3DS cannot run game cards designed specifically for the New 3DS. The Nintendo Switch is only be compatible with game cards designed specifically for the system.

Curiously, the Nintendo Switch's game cards are coated in denatonium benzoate, a nontoxic chemical known for being the most bitter-tasting chemical compound in the world. According to Nintendo, the purpose of this chemical coating is to deter young children from ingesting and subsequently choking on the game cards. The discovery of the Switch game cards' bitter taste ironically led to numerous people tasting the denatonium benozate for themselves, with varying results.

Despite ROM cartridges having fallen out of fashion for home consoles as a result of the Sony PlayStation's success over the N64, game cards have continuously found success with Nintendo handhelds as a result of their faster loading times (which is especially advantageous due to how handheld games are typically played in short intervals), lower vulnerability to piracy, and reduced system manufacturing costs (optical discs require an optical drive consisting of a spindle and a laser in order to be read, which are more expensive due to the use of moving and/or fragile parts that renders them highly liable to break down; cartridges can simply be read with connector pins attached to the motherboard). 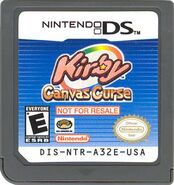 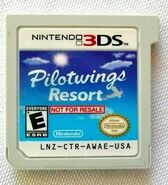 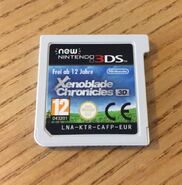 Nintendo Switch, The Legend of Zelda: Breath of the Wild 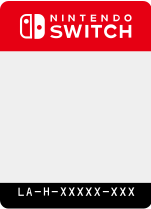 Add a photo to this gallery
Retrieved from "https://nintendo.fandom.com/wiki/Game_Card?oldid=380636"
Community content is available under CC-BY-SA unless otherwise noted.