Gaius is a character in the 3DS game Fire Emblem: Awakening. He starts the game as a Thief. Always calm, before joining Chrom's army, he worked as a small time thief taking a job if the price was right. He has quite a sweet-tooth, and almost always has over fifty types of candy concealed on himself. He is also quite agile, being able to climb cliffs that most people can't (as seen in the support between him and Panne).

Also if he has a daughter, his daughter will inherit the Pegasus Knight class instead of Fighter

He can form relationships with the following characters

In the 3DS version of Super Smash Bros. for Nintendo 3DS/Wii U, he appears as a trophy. The following is the trophy description

Here's a man who really would take candy from a baby. This Ylissean Thief is the cool, collected sort, willing to do any kind of job if the price is right. That said, he's got quite a sweet tooth, and keeping up a cool image is really hard if you're always eating lolipops and hoarding sweets. His silly nicknames for people don't help much either... 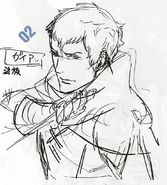 Retrieved from "https://nintendo.fandom.com/wiki/Gaius?oldid=520038"
Community content is available under CC-BY-SA unless otherwise noted.