Fury, also known as The Gatherer of Rancor are a type of common Demon in the Bayonetta series. They are known to visits hysteric humans nightly and caws in their ear until they die so they can prey upon them.

Fury are very weak Demons that serves as the basic airborne slodiers of the infernal army in the same way Compassion and Decorations are for the army of Paradiso. They can only perform basic claw slash attacks and one magical attack that has the ability to slow down Bayonetta's movements, which can be very dangerous as they are often fought alongside way stronger enemies.

"A demonic bird that gathers in Inferno's Johnson Forest. It possesses the wings of a bat, head of a dragon, and tail of a snake. It visits the bedrooms of hysteric humans nightly, caws in their ears until they weaken and die, then they devour their flesh.

There are some who have tried to escape from its curse, but its terrifying cyclops gaze ensnares its target as if it were petrified." 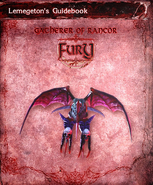 Fury's page in Lemegeton's Guidebook.
Add a photo to this gallery
Retrieved from "https://nintendo.fandom.com/wiki/Fury?oldid=523213"
Community content is available under CC-BY-SA unless otherwise noted.