The Frog Suit appears in Super Mario Bros. 3 in Water Land, which is appropriately aquatic. This suit makes Mario or Luigi look like a very large frog with either character's face. It lets you swim very easily and allows you to stop in the water without the fear of sinking. On land, the player is much slower but can jump fairly high.

The Frog Suit gives the player vastly improved control underwater and the ability to go against currents at the cost of not being able to run past the second speed arrow with it. It does have much better jumping ability and holding a shell will allow the player to run.

Certain Toad Houses contain the Frog Suit but, otherwise it is relatively uncommon except for Water Land.

Frog Suit returns in Paper Mario: Sticker Star for the Nintendo 3DS after a 20+ year absence, mainly as a sticker that Mario can wear. Using it, Mario can dodge attacks by jumping. Originally, it was similar to the Multibounce badge in previous games but, the Line Jump sticker took over that role.

As a reward for beating the NES Remix event course, the player unlocks the Frog Suit as a costume for the Mystery Mushroom. It doesn't impact Mario's movement but, it looks nearly identical to the original. 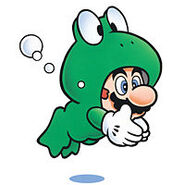 Retrieved from "https://nintendo.fandom.com/wiki/Frog_Suit?oldid=346676"
Community content is available under CC-BY-SA unless otherwise noted.