Romaji: Zunbaba) is a giant robotic dragon that is the first boss in the game Super Paper Mario, found in Yold Desert, at the end of Yold Ruins. It has spiral eyes and magenta skin, and it can burrow into the sand and go underground. It will surprise Mario and appear out of the ground, and then fly in the air. Fracktail slightly resembles a Chinese dragon, and is colored like Hooktail, his equivalent from Paper Mario: The Thousand-Year Door. The repeating patterned segments of Fracktail's body, as well as its name are both references to a fractal, a geometric repetition of a pattern. He claims Mario has a Level 5 mustache.

Fracktail is originally the robotic protector of the Pure Heart, who spends "thousands of years" (it is actually 1,500 years), protecting it from "lawless intruders." When he realizes that Mario is the hero meant to obtain the Pure Heart (after scanning his database, which made his eyes turn into the Internet connection symbol for the Wii Shop Channel), he was about to just let him pass. However, Count Bleck's minion, Dimentio blasts him with a spell, and causes him to short-circuit. Fracktail's system is corrupted and it starts speaking nonsense (for example, it says Mario's threat level is "jelly roll 1"), riffs on MS-DOS and Windows 95, Windows 98, and Windows Me error messages, makes a reference to the The Legend of Zelda character Error (who stated "I AM ERROR"), and then yells "CTRL ALT DEL" (control, alt, delete). It then attacks Mario.

In order to defeat Fracktail, Mario must flip into 3D then jump on top of its long back when the robot glides low. The battle scene will then shift to the back of Fracktail's back as he flies. Players must then pick up a Frackle crawling around on its back using Thoreau and throw the Frackle at Fracktail's weak point which is its antenna. After taking three hits, Fracktail will perform an aerial loop. Mario must jump from the tail at the end of the loop back onto the head; failing to do so will result in falling to the ground and having to dodge Fracktail's attacks until the chance to jump onto its back arises again.

Fracktail must be hit in its antenna nine times, and upon being defeated, its personality briefly returns to normal. It apologizes for its error in attacking Mario and pleads that he save the world, and then it explodes.

Fracktail appears, having the same role in the Super Mario-Kun Super Paper Mario story arc in volume 37. It takes a more organic appearance than it does in the games. After Mario defeats it, it gives Mario the Pure Heart, and unlike the game, it does not explode.

Fracktail makes an appearance as a trophy in Super Smash Bros. Brawl. Excluding Bowser, he is the only Paper Mario series boss to have this distinction. 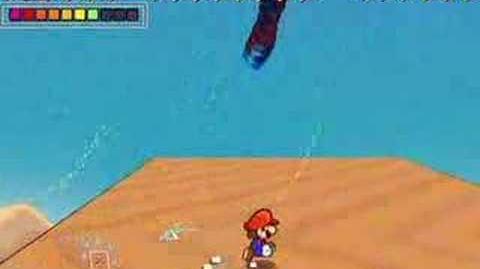 Retrieved from "https://nintendo.fandom.com/wiki/Fracktail?oldid=500345"
Community content is available under CC-BY-SA unless otherwise noted.