Fortitude is a massive angel with three heads, one is a gigantic upside down human face and two smaller draconic heads. Likewise, Fortitudo's body is shaped like a traditional occidental dragon, which ties in with its ability to control the element of fire. It also has draconic claws as feet and two massive wings that are reminiscent of both the draconic and the angelic design. Fortitudo is also said to be the very incarnation of the aspect of courage and fortitude. Natural phenomenon such as volcanic eruption and massive fires are often affiliated to this being. It is the source of inspiration for the Courage, a type of Angel made to represent the Virtue inspired by Fortitudo itself.

Fortitudo is the most seen of all the Cardinal Virtues, it first appear during the first scene of the game where it attacks Jeanne and Bayonetta while they are falling on the Umbra Clock Tower.

During Chapter I, it fights Bayonetta and two other Umbra Witch in a flashback sequence just outside the city of Vigrid, but retreats after sustaining enough damage. It later personally ambushes Bayonetta, but is defeated thus ending the chapter.

At the begining of Chapter II, it ask Bayonetta if she is the one to have awakened it but Bayonetta respond by insulting it instead. After exchanging insults, Fortitudo disapear before the witch could attack it and create a volcanic eruption just under the city to get rid of her.

He then appear in the ruined colosseum, where it serves as the boss of Chapter IV but is ultimately defeated by Bayonetta who rip its two draconic head off before summoning Malphas to destroy its giant human head and drag it to Inferno.

In Chapter IX, The Prophet uses his powers to show a flashback of the Witch Hunts to Bayonetta. In this flashback, Balder and Rosa are confronted by Fortitudo who want to get rid of them to obtain the Eyes of the World for Paradiso and the Creator.

Fortitudo appears in Chapter XIII after Bayonetta meet her mother and fought off the weaker Angels. It then try to fight the witches but is defeated and thrown away by them. It reappear in Chapter XV where it destroys the Umbra Clock Tower before trying to hit Bayonetta and Rosa with one of its fireballs.

Fortitudo appears in the background of the Umbra Clock Tower stage where it is seen flying with other Angels. Fortitudo is however perfectly harmless and will not attack the players.

"Amongst the spiritually powerful of the Middle Ages, it was thought Paradiso held for all a Divine Will, and as a result, they developed heavenly logic. The concept of the "Cardinal Virtues" was born of this logic, and classifies Paradiso's Divine Will into four broad groups. These Cardinal Virtues occasionally become physical manifestations of the great intentions of Paradiso, and are known as the Laguna, inspiring awe in the masses. Personifying courage and fortitude, Fortitudo has been depicted as a terrifying being sporting an enormous face and two dragon's heads. He is said to be capable of summoning magma flows at will." 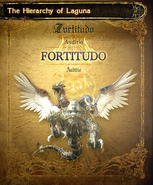 The Fortitudo page in the Hierarchy of Laguna book.

Fortitudo's card.
Add a photo to this gallery
Retrieved from "https://nintendo.fandom.com/wiki/Fortitudo?oldid=527356"
Community content is available under CC-BY-SA unless otherwise noted.