Romaji: Fire Emblem Kakusei, Faiā Emuburemu Kakusei) is a strategy RPG game for the Nintendo 3DS as the 11th main entry in the Fire Emblem series. The game was announced at Nintendo's 2011 3DS Conference ahead of the 2011 Tokyo Game Show.

The game was succeeded by Fire Emblem Fates, released in Japan in June 2015, and in Western territories in February 2016.

The story follows Chrom, a prince of the kingdom of Ylisse, and his companions as they struggle during a turbulent era. Players are able to combine the might of nearby allies to enter dual battles to defeat enemies.

The traversable world map, last seen in The Sacred Stones, and special skills like Astra from Radiant Dawn make a return. This game also features a customizable Avatar, a feature last seen in New Mystery of the Emblem. There is also a playable second generation of characters, which was last seen in Genealogy of the Holy War.

These are the 1st Generation characters.

These are the 2nd Generation characters.

These are the SpotPass only characters.

These are the DLC characters.

From Fire Emblem: Shin Monshō no Nazo ~Hikari to Kage no Eiyū~

From Fire Emblem: Fuuin no Tsurugi

From Fire Emblem: The Sacred Stones

From Fire Emblem: Path of Radiance

* - Also can be a NPC or later becomes a NPC

In Fire Emblem: Awakening, all the characters have a class which sets their appaerance and stats. Characters start with a set class, most of which can be improved to promoted classes by using a Master Seal after they reach level 10. All the characters also have at least three sets of classes that they can change between using Second Seals. Classes are divided into base classes, promoted classes, and special classes.

Each special class has a way in which it is different from normal classes. Taguels and manaketes use special stones to transform and attack. Dancers can choose to use a dance ability instead of an attack to give a unit, which has already moved during that turn, another move for that turn. Villagers are more of a novelty class, as they were in earlier games an NPC class. Lodestar and conqueror are the special classes created for Marth and Wahlhart. Demon fighter and bride are different from most special classes, as they are gender specific, as only male characters can be demon fighters and only female characters can be brides, and characters can only become them by using special items obtained through specific xenologues.

In battle, when two or more characters stand next to each other or are paired up, they give the attacking or defending character temporary stat boosts depending on their support level.

The second generation characters, for the most part, are determined by the mother. For example Henry can marry Panne and have Yarne as his child, however if Henry marries Tharja, then he will have Noire as his child. The only exceptions are Chrom who will always have Lucina as one of his children, and Avatar who will always have Morgan as one of his/her children. However not all female, first generation characters can have children, notably Anna, Say'ri, Tiki, and a few other special characters. Though all female characters can marry Avatar, and can have Morgan as their child. Also not all male characters can marry each female character, notably spotpass paralogue characters, who can only marry the Avatar.

The teams consist of a character from a previous Fire Emblem game as an Einherjar as well as several generic enemies. When a team is selected from the bonus box it will appear in a random area on the world map. When the team is encountered, you can check their stats, recruit the einherjar using gold, fight the team in order to recruit the einherjar, and buying items from the teams. If any action is taken besides checking their stats, then the team will leave the map. However, the team can be brought back to the world map from the bonus box.

The paralogues distributed through SpotPass are special paralouges where characters from the man story can be recruited. Most of the characters were enemies or characters that were killed during the events of the story. One paralogue also include a new character, which doesn't appear in the main story, Priam. The downloaded paralogues can be activated in the bonus box, but To Slay a God must be completed to be able to play any of the paralogues.

A download-able demo for Fire Emblem: Awakening was released in the Nintendo eShop on January 17, 2013, [1] and allowed for 30 uses. First it let the player choose the difficulty (Normal, Hard, or Lunatic), and the game mode (only Casual). Then it lets the player design the Avatar, however they could only choose the Avatar's name, birthday, asset, and flaw, as all of the other options (namely appearance and gender) were disabled for the demo version.

Then it starts the prologue (including the beginning cutscene). After the cutscene is over, the battle beings, as well as an in-battle tutorial, that teaches how to play the game. After the battle, there is also another cutscene. The demo also lets the player advance to Chapter 1 as well, and after completing that chapter there is another cutscene, but after that the demo ends. 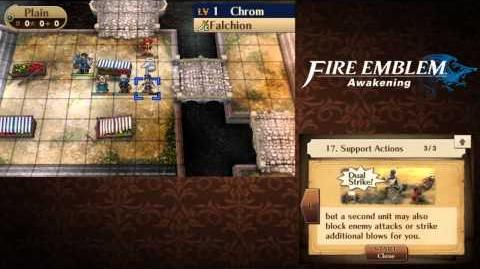 In Japan, the game has sold more than 240,000 units, making it the fastest-selling game in the Fire Emblem series.

Retrieved from "https://nintendo.fandom.com/wiki/Fire_Emblem_Awakening?oldid=611157"
Community content is available under CC-BY-SA unless otherwise noted.