Meaning: Final Fantasy Four) (initially known as Final Fantasy II in North America) is a RPG video game that was released both in Japan and America in 1991. In America, it was first titled Final Fantasy II, but the remakes have gone back to IV. The game is known for introducing the active time battle system, which has been implemented in various other RPG's following it, including six other Final Fantasy titles.

Final Fantasy IV was one of the earliest games to use the Mode 7 chip, which allowed for enhanced graphics. It included an awe-inspired score by series veteran Nobuo Uematsu, and has been considered by many as one of the best games the series has to offer. The game has been remade twice for Nintendo Systems, once for the GBA and again on the DS and has gotten a continuation in Final Fantasy IV: The After Years that released on Wii Ware.

Final Fantasy IV takes place on one large overworld. The overworld can be traveled rather quickly, and to make things even faster, you're eventually given the option to travel via an airship or a Chocobo. On the overworld are assorted villages and dungeons that are seen by an icon. Many of the dungeons take place on or inside mountains. To enter either of these, you'll just have to simply touch the icon by moving your character on top of it.

Once inside, the screen will be zoomed and you'll have a better view of your surroundings. Villages have inns where your characters can regain their health and magic points, though for a price. Shops can also be here, with new items being found in shops as you progress through the game. In the SNES version of the game, the player can store their items with the Fat Chocobo, who can be found in one of the villages, though in the DS version this option isn't required as you can hold an unlimited amount of items.

Of course, multiple houses are also placed in each village, each offering an assortment of conversations with the householder inside. By touching some of the various objects found in each village, you'll sometimes be rewarded with minor items such as potions or gil (the series' currency). These villages, along with the dungeons, will also offer a progression of the story.

In the dungeons, you'll traverse multiple different rooms and fight gradually harder enemies. Naturally you'll oftentimes have to battle a boss at the end of the dungeon, though this is usually not the case for the minor ones. Each boss has a set pattern that will allow the player to know when to attack and when to stand down. Defeating a boss will usually end the dungeon.

Initially, Final Fantasy IV was released on July 19, 1991 on the Super Famicom (the Japanese equivalent to the SNES). When translated for the SNES, minor changes were made such as a name change (from Final Fantasy IV to Final Fantasy II) and alterations of aspects that could offend the player. Eventually the game would be remade for the Game Boy Advance and the Nintendo DS, the latter of which featured 3D graphics similar to the Final Fantasy III remake on the same handheld. It was also released on the PlayStation and Wonder Swan - two non-Nintendo consoles.

The 20th Anniversary Edition was released on the Nintendo DS in 2007-2008, and featured updated 3D graphics along with a multitude of other improvements. Various new spells have been implemented, though most of the special features present in the Game Boy Advance are absent.

The Fat Chocobo no longer holds your items, but will rather present to you five minigames that can upgrade your Whyt - a new summon in the game, among other things such as allowing you to listen to music and watching previously seen cutscenes.

The following is the box art for the game (both Japanese and American). 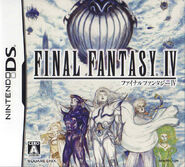 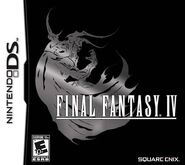 American box art.
Add a photo to this gallery

The boss battle music from Final Fantasy IV was used once more in the SNES video game Super Mario RPG: Legend of the Seven Stars during a boss fight against Culex, who is actually supposed to resemble a Final Fantasy boss. It has also been said that the Japanese Super Mario RPG box art is deliberately reminiscent of Final Fantasy IV's Japanese box art, just with swapped characters (even the Yoshi might have taken the place of the Chocobo).

The Active Time Battle system, which was introduced in Final Fantasy IV, was implemented into six other Final Fantasy titles following it and counting.

Retrieved from "https://nintendo.fandom.com/wiki/Final_Fantasy_IV?oldid=565238"
Community content is available under CC-BY-SA unless otherwise noted.