The Excitebiker (エキサイトバイク, Ekisaitobaiku) is the playable character in Excitebike. Since his first appearance he has appeared in his pixeled form in many games such as Tetris DS and as an Assist Trophy in Super Smash Bros. Brawl, even though he technically appeared in 3D in Excitebike 64. There are also identical opponents in purple and turquoise colors.

In the original Excitebike the Excitebiker raced on one of five different courses, trying to be as fast as only possible. There were two different modes for him to race in, either a simple challenge race without any opponents, or an Excitebike race against many other opponents. The later becomes more difficult as the enemies serves as obstacles. The different tracks can be played in any order, and there are no rewards for winning.

In the sequel for the arcade and Famicom Disk System, another excitebiker in blue appeared. This character was used in the new two player mode called Vs. Excite. The Original Excite mode was also changed. The excitebiker now first had to race in a challenge race and then race the same stage in an Excitebike race. As long as his time placed at least third, he would qualify for the next race. There was a total of seven stages, meaning the Excitebiker had to complete fourteen races. There was also three different difficult levels to choose from.

While the Excitebiker didn’t actually appear in this game, six new racers did, all looking a bit like the original excitebiker.

The Excitebikers appears in the WiiWare sequel to the original Excitebike where the competition is taken around the world, from London to Fiji. In the game the excitebikers appear in their original form but with simple 3D graphics, rather than the realistic graphics from Excitebike 64. This time around the color of the excitebiker can be chosen, as new colors are unlocked as you progress through the game. The enemy racers also have a few new color schemes, such as a white color.

This top-of-the-line motocross motorcycle can accelerate like crazy with its turbo, but this also causes the temperature gauge to rise rapidly; if used too often, the bike will overheat. You can cool your hot bike down by running over special icons scattered across the track. The turbo and ramps let you pull insane airs.

High-performance motocross bikes that handle massive jumps with ease. Using turbo on these beauties gives a speed boost but also causes the engine's internal temperature to rise. Overuse turbo, and the bikes overheat and shut down. The engines can be cooled by running over certain marks on the track. Excitebikes cap off every race with an undeniably awesome wheelie.

The trophy in Melee.

The trophy in Brawl. 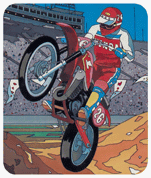 The sticker in Brawl.
Add a photo to this gallery
Retrieved from "https://nintendo.fandom.com/wiki/Excitebiker?oldid=523870"
Community content is available under CC-BY-SA unless otherwise noted.