Eternatus is a Poison/Dragon Legendary Pokémon introduced in the eighth generation games, Pokémon Sword and Shield.

While it is not known to evolve into or from any other Pokémon, the player battles a powered-up form known as Eternamax Eternatus in the climax of Pokémon Sword and Shield. This form is also briefly seen when it uses its signature move, Eternabeam, but cannot be acquired legitimately in-game. 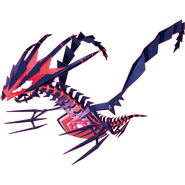 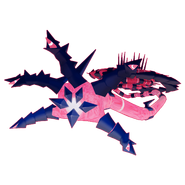 Eternamax Eternatus's official artwork
Add a photo to this gallery
Retrieved from "https://nintendo.fandom.com/wiki/Eternatus?oldid=557951"
Community content is available under CC-BY-SA unless otherwise noted.