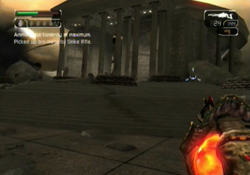 Enemy is the third mission in The Conduit. It's where the story takes a twist. The player learns that John Adams is actually an enemy.

John Adams sends Michael Ford to an abandoned military complex under Washington, D.C. called Bunker 13, where Prometheus is suspected of hiding out. He is to hack into the computer systems and download as much data as possible.

Upon entering the Bunker, Ford is attacked by Puppet Humans. Fighting his way to the communications room, Ford uses the All-Seeing Eye (ASE) to hack the data terminal. He then heads topside. The tunnels from the Bunker lead up to the Jefferson Memorial where a Drudge army is waiting.

Adams then turns on Ford, leaving him stranded against the Drudge forces. But Ford is then unexpectedly contacted by Prometheus. During the battle, Prometheus explains that Adams was only using Ford to get to the ASE. After defeating the last of the Drudge forces at the Memorial, Prometheus sends a helicopter to pick up Ford.

Retrieved from "https://nintendo.fandom.com/wiki/Enemy?oldid=310327"
Community content is available under CC-BY-SA unless otherwise noted.