Emmeryn is the ninth chapter of Fire Emblem: Awakening.

At the beginning of the chapter Emmeryn stands atop a ledge above the desert ruins. King Gangrel and Aversa stand atop a lower ledge, ready to order her execution. Gangrel orders the execution, and the executioner closes in, raising his axe. At the last moment however, Chrom orders the rescue to begin, and Flavia throws an axe, killing the executor. Chrom and the Shepherds rush into the area, and Gangrel orders the Plegian army to kill them. Moments before the battle, Tharja expresses discontent in the orders, saying she has no more loyalty to Plegia. During the battle, Chrom comes across Libra on the battlefield, and temporarily mistakes him as a woman. Chrom then meets Tharja, who also joins the Shepherds.

After the Shepherds kill Campari, the general in charge, they call for Gangrel to concede defeat. Moments later, Phila and her squad rush into the area, planning to rescue Emmeryn. Not ready to quit, Aversa summons an army of Archer Risen, and they kill Phila and the other members of her squad. They then turn their bows towards Emmeryn. Gangrel states that if Chrom doesn't give him the Fire Emblem, he will turn Emmeryn into "the world's largest quiver". Chrom sees no good solution, and refuses to accept either option. Gangrel gives Chrom until the count of three, but Emmeryn calls out. She states that she can't let Chrom deal with either decision. Emmeryn then leaps from the ledge uttering the final words: "Chrom...Lissa...My people...know that I always loved you." and falls to her death. Chrom runs to catch her, but he is too late, and he calls out for Gangrel's blood. Basilo and Flavia run in and tell Chrom that the must make their escape now or never. Chrom wishes to take Emmeryn's body with them, but Baslilo says they don't have time, and they leave without her. 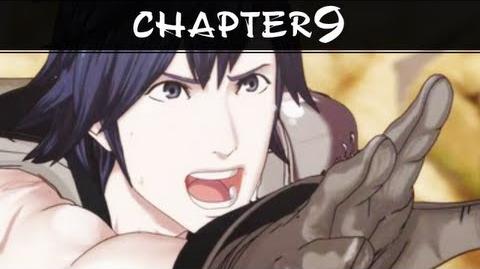 Retrieved from "https://nintendo.fandom.com/wiki/Emmeryn_(chapter)?oldid=498461"
Community content is available under CC-BY-SA unless otherwise noted.