Nintendo's presentation, titled Nintendo Direct: E3 2018, aired on June 12 at 9 a.m. PT (12 p.m. ET), with Nintendo Treehouse Live at E3 immediately following the presentation. They have confirmed the upcoming Super Smash Bros. game for Nintendo Switch, as well as other games for the presentation.

In this presentation, Nintendo showed off the following games:

Nintendo has announced that they have held two tournaments this year. They were held from June 11-12.

The Super Smash Bros. Invitational 2018 was held on June 12, immediately following the Splatoon 2 World Championship finals. It was in a similar vein as the Super Smash Bros. Invitational from E3 2014. The eight competitors for the tournament were announced on May 9.[1] Additionally, there were exhibition matches from cosplayers and special guests. Masahiro Sakurai presented the winner, ZeRo, with a trophy and medal. 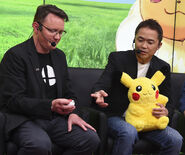 Retrieved from "https://nintendo.fandom.com/wiki/Electronic_Entertainment_Expo_2018?oldid=532356"
Community content is available under CC-BY-SA unless otherwise noted.