EXPonential Growth is xenologue fourteen of Fire Emblem: Awakening. It can be purchased for $2.50 USD in North America and for ¥300 Yen in Japan. The xenologue's main purpose is to gain a lot of EXP by defeating many Entombed.

In the Outrealms, Chrom and The Shepherds meet an Anna, who has a French accent. The Anna explains that they are in the Outrealms, a place where fantasies come true. Chrom, mistaking the Anna for the Anna that is part of The Shepherds, asks her if she is ok, because she seems different. Anna says that Chrom is confusing her with their Anna, and that she is an alternate version of her.

The Anna asks Chrom to help defeat the Entombed that are coming from the ruins, because they are raiding the villages' crop fields, which are located in the ruins. After Chrom asks whey there is a village inside the ruins and the Entombed are eating vegetables, Anna explains that it is because they are alternate versions, as they are in an alternate world. Chrom offers to give the Anna some weapons to fight off the monsters, because he has matters to deal with in his world. Anna says that she is a person who can't use weapons and is pretending to have a ridiculous accent. Anna says that she will then just wait for the next group of people to pass by, while the villagers go hungry. She then goes into a long rambling explanation about how the villagers will be effected, from crops being eaten, to children not having food, to people in tomato costumes being attacked by monsters who believe them to be tomatoes. Chrom points out how much she sounds like Hubba. Eventually Chrom agrees to help her, and Anna tells him, in a normal accent, that by helping get rid of the entombed he will gain much of "you know what" (referring to EXP). When Chrom inquires as to what she is talking about, Anna says that he will figure it out, and to hurry up because the entombed are currently fleeing as they speak. She goes back to her French accent and says that it is very sweet, to which, Chrom replies "Le sigh...".

After the entombed are defeated or escape, the Anna congratulates Chrom on defeating the entombed. Chrom says that he and The Shepherds are stronger for the experience. The Anna interrupts Chrom and says the entombed spring up like weeds and that they can come back anytime that they want the challenge. She also tells them that the villagers would be happy to see them again as well. Chrom sarcastically agrees because they saved the villagers' vegetables which the villagers supposedly grow inside the stony ruins, which were threatened by vegetarian monsters. The Anna then says good bye and Chrom and The Shepherds leave.

When first attacking an entombed, each regular character has a unique line about their thoughts at that moment. Some wondering about the entombed, others think about what "you know what" meant, as well as many others.

Chrom: Where are we...?
Anna: Ah, bonjour! You are een ze Outrealms--a place where all you fantazees come true. We have more exotic adventures here zan you can shake ze steek at! ...Do not worry. I weel not tell ze wives.
Chrom: Er...Anna? Are you feeling all right? You seem different...
Anna: Nonsense! Do not confuse me weez some real-life acquaintance! I am très different. Maybe, how you say..."alternotte" of one you know? Hon hon!
Chrom: Oh. I see. ...I think.
Anna: However, I am een need of ze help! Could you destroy ze Entombed zat are pouring out of zees ruins? Zey have been raiding our village and stealing all ze crops from ze fields!
Chrom: That's terrible! ...Wait, there's a village inside the ruins? How is that even possible? And wait... What kind of a monster zombie thing eats vegetables?
Anna: Zey are alternotte, too, chérie! Eet is ze alternotte world!
Chrom: Right. Well, um... Look, we have urgent matters to attend to in our own world. If we lent you some weapons, I'm sure you could take care of a few corpses...?
Anna: Moi? I am just ze poor defenseless woman pretending to have ze ridiculous accent! I cannot actually do ze fighting. *Sigh* A pity... If you cannot help, I weel just have to wait for ze next passersby. Meanwhile, ze villagers will starve... I can peekture ze lamentations of ze women and ze children even now...
Chrom: Oh gods, now you're starting to sound like Hubba...
Anna: "Zat pumpkin, he was like ze son to me! And now he haz been eaten!" "Mama, ze children in ze other villages have potatoes, but not me!" "Mon amour, I warned you not to dress like ze tomato! Show me zose bite marks..."
Chrom: What? Why would anyone...? That doesn't even make sense! ...Fine. FINE. We'll kill all the damn creatures for you. All right?
Anna: Whoa there, buddy--take it easy. I just work here. Besides, it ain't all charity. You'll gain plenty in the bargain, too. Takin' out them Entombed'll earn ya a lot more you know what.
Chrom: ...No, I'm afraid I don't know what?
Anna: Ah, well. You'll figure it out. You'd better hurry, though. Those Entombed are sure to be dashin' for the exits, toot sweet. *Ahem* Zat is to say, tout de suite! Bon chance! Tee hee!
Chrom: Le sigh...

Anna: Et voila! Ze Entombed are no more!
Chrom: Indeed. And we're all stronger for the experience. It was actu--
Anna: Oh, zat's nice. But ze Entombed spring up like weeds, oui? So come back anytime you are looking for ze shallenge! No doubt ze villagers weel weep tears of joy to zee you again.
Chrom: Right. Because we can save their precious vegetables... Vegetables they somehow grow amidst stony ruins... Vegetables threatened by...vegetarian...monsters...
Anna: Exactement! Zee you again zoon, monsieur! 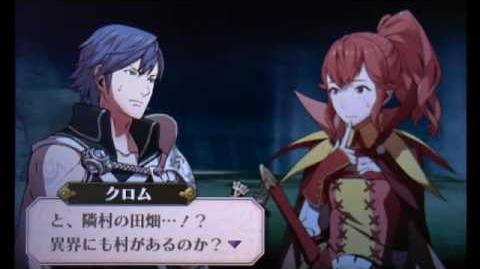 Retrieved from "https://nintendo.fandom.com/wiki/EXPonential_Growth?oldid=416237"
Community content is available under CC-BY-SA unless otherwise noted.