E-102 Gamma is one of Dr. Ivo Robotnik's Robots, and one of his more prouder creations. E-102 debuted in Sonic Adventure, later remade on the Nintendo GameCube as Sonic Adventure DX: Director's Cut. It was the first to successfully defeat Sonic, and Eggman eventually turned this unique robot into a series of robots. E-102 Gamma is powered by a flicky inside him. Regardless, E-102 Gamma, the character, the flicky inside him became able to gain control of him, and he turned against Robotnik, and helped Amy Rose. Eventually, E-102 was self-destructed, and was never seen again after he flew away as the flicky that he once was along with a white flicky (E-101 Beta). 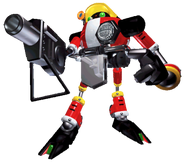 Sonic Battle.
Add a photo to this gallery
Retrieved from "https://nintendo.fandom.com/wiki/E-102_Gamma?oldid=527564"
Community content is available under CC-BY-SA unless otherwise noted.