Dunban is one of the playable characters in the Wii RPG Xenoblade Chronicles. He is a thirty year old Hom from Colony 9 and is Fiora's older brother and act as a paternal figure for both Shulk and Reyn and later the rest of the group. He also was a good friend of Mumkhar and Dickson.

During the First Battle of Sword Valley and the attack of Colony 9, Dunban is equipped with the Monado and has access to its Arts.

Dunban appears in Shulk's final smash to perform a Chain Attack along with Riki.

On April 15, a Mii costume of Dunban was released for $.75 for one version of Smash Bros. and $1.15 for both. It is for the Mii Swordfighter. 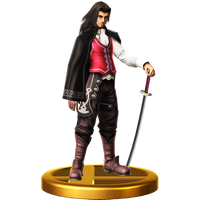