Duma is a Manakete who serves as the final boss and main antagonist of Fire Emblem Gaiden and its remake, Fire Emblem Echoes: Shadows of Valentia. He is considered as the patron deity of Rigel where he is refered to as the War Father. He is the brother of Mila, the one considered as the patron deity of Zofia. Like most older Manaketes/Dragons in the series, he eventually became mad and caused war between Rigel and Zofia.

Thousands of years ago, Duma was from the Divine Dragon tribe in Archanea. He served Naga, the ruler of the Dragon tribes and the strongest of the Divine Dragons, protecting her with his military might, earning the title of Kingshield along with her favor. His sister would meanwhile bless the lands to allow prosperity for the dragons, earning the title of Kingsgrail.

When humans began to exist in the land, the dragons offered them their knowledge, allowing them to prosper and advance, eventually creating the city known as Thabes. However, Duma grew wary of the humans, and feared that they had grown too powerful. He sent his soldiers to Thabes, and had it destroyed in three days, leaving the remaining survivors to scatter across the continent. This caused Naga to become furious with him, Mila sided with her brother but despite their powers, they were exiled after ravaging the land.

Before he departed, Naga gave him one of her fangs that was carved into a blade that would be named Falchion. This weapon was intended to be used against him and his sister by humans should the need arise where they degenerate into madness and need to be put down. The two siblings traversed the ocean for seven days before they finally reached the continent of Valentia, which they would claim as their new home. There, they would become patron deities in the land.

Despite settling in Valentia, Duma was still filled with resentment and bitterness towards Naga for his exile and desires vengeance against her. He ordered his people to erect a large tower to face the continent of Archanea from atop a mountain and even if that was approved by his sister, Duma's lust for battle, along with his beliefs over humanity led him to eventually clash with her. While Duma believed that hardship creates strong humans, Mila believed that humans should live in peace.

The two fought and eventually reached an accord: they would divide the land of Valentia into two, where Duma would rule the north which would become later known as Rigel, and Mila the south that would become Zofia, and neither was allowed to intervene with the other and cross into their nations.

Eventually, Duma gained his own cult known as the Duma Faithful. As time passed on, Duma's strength began to wane, and during this period of time, a pirate nation began to emerge that posed a threat to the Valentian mainland. The two gods forged a pact with humans. Duma performed his blood pact with the fighter Rigel, and through that blood pact, Rigel was bestowed and capable of wielding Falchion. After the pirates defeat, the Falchion was returned to the Duma Temple.

From this, the nation of Rigel was founded with Duma as the leader. Duma also established a rule that strong Brand-bearers that can wield Falchion would get priority over the throne in Rigel. This led Emperor Rudolf to become the emperor as he was a distant relative of Emperor Rigel III.

A century later, Duma's madness would finally begin to take over as he degenerated and he urged Rudolf to declare war against Zofia to conquer it. This also led to Duma favoring ambitious people that put their own desires above all else, such as Jedah, warping the Duma Faithful into a group of religious fanatics.

Several years later after Duma's degeneration began to overwhelm him, Duma's body began to slowly rot along with his decaying mind, with him manifesting as a giant eyeball apart from his main body, making Rudolf finally starting to set his plan to put an end to the reign of gods into motion, as Duma bestowed Falchion to Rudolf to seal Mila away. During the war, Jedah tries to discover what ailed Duma, leading him to conclude that Duma desired the soul of a Brand bearer to ease Duma's pain, causing him to target Celica.

After Rudolf's death Berkut began to descend into despair and rage over his loss over Alm, Duma began to communicate with him, offering Berkut power in exchange of his fiancée Rinea's soul. Alongside that, Jedah successfully had goaded Celica to follow him by tricking her into believing that he can free Mila from her petrification sealing but offersher to Duma instead. She is saved by Mila who use the last of her powers to restore Celica's life and soul.

The two royals eventually fight Duma and defeat it. Duma regains his sense of self once more, and entrusts Valentia to Celica and Alm, while he falls into a deep slumber with his sister, and warns the two Brand-bearers to never wake them. He is eventually buried alongside his sister on a mountaintop, while his religion would merge with Mila's into a single one. In time, two trees grew from where Duma and Mila were buried and intertwined to create what would be known as the Mila Tree. 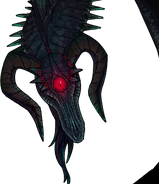 Duma in FE2.
Add a photo to this gallery

Retrieved from "https://nintendo.fandom.com/wiki/Duma?oldid=503669"
Community content is available under CC-BY-SA unless otherwise noted.