The Dragoon (竜騎士 Ryuukishi lit. Dragon Knight) is a playable character class in the Final Fantasy series. They wield lances and often have "Highwind" in their name. Their special ability is Jump which allows them to jump up into the air for a short amount of time and come down while inflicting often double the damage that would be used by attacking normally. This is a good tactic for fighting most bosses because when they are in the air, they cannot be harmed by any attacks, but they can also not be healed, and defensive spells that are cast on the whole party miss the Dragoon. 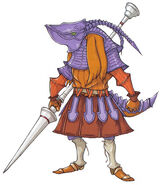 A Bangaa Dragoon from Final Fantasy Tactics Advance.
Add a photo to this gallery
Retrieved from "https://nintendo.fandom.com/wiki/Dragoon_(Final_Fantasy)?oldid=317905"
Community content is available under CC-BY-SA unless otherwise noted.