Dr. Ivo Robotnik (usually called Dr. Eggman) is the main antagonist of the Sonic the Hedgehog series. He is Sonic's arch nemesis, but has occasionally teamed up with him.

In Sonic Adventure DX: Director's Cut, Dr. Ivo Robotnik aka Eggman found Chaos 0 and went to obtain the Chaos Emeralds to power up Chaos so that he could destroy Station Square. Eventually, he found all seven Chaos Emeralds and gave them to Chaos turning him into Perfect Chaos.

In Sonic Adventure 2: Battle, he entered a top secret government base to find the world's greatest and top secret invention which turned out to be Shadow the Hedgehog. Shadow the Hedgehog told him of a space station, the ARK, that had a weapon, called the Eclipse Cannon, which was so powerful that it could destroy stars. The only problem is that it needed power from the Chaos Emeralds. Later, he got them and put them in it, but then when he found out what his grandfather's real intentions had been; he teamed up and helped Sonic deactivate the cannon. His grandfather's Intentions had been to blow up the world!

Eggman along with Bowser competed in Mario & Sonic at the Olympic Games.

Eggman is a trophy you collect in Brawl by collecting 500 stickers.

Eggman returns to compete in Mario & Sonic at the Olympic Winter Games. 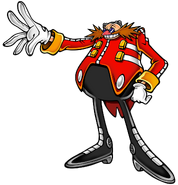 Mario & Sonic at the Olympic Games.

Still shot from the 2012 Disney film Wreck-It Ralph.
Add a photo to this gallery
Retrieved from "https://nintendo.fandom.com/wiki/Dr._Eggman?oldid=533712"
Community content is available under CC-BY-SA unless otherwise noted.