Romaji: Dokku Ruisu
) is a character in the Punch-Out!! series, primarily seen in Mike Tyson's Punch-Out!! (later remade into Punch-Out!! Featuring Mr. Dream) and in Punch-Out!! for the Wii. He has his own star role in Doc Louis's Punch-Out!!.

Doc Louis is a former heavyweight champ and is Little Mac's trainer, giving him encouraging words and hints to Mac during the fights. He loves chocolate and will sometimes waste opportunities to teach Mac in between rounds to tell him this.

In Super Smash Bros. for Nintendo 3DS/Wii U, Doc Louis is featured as a part of Little Mac's victory animations, can be heard talking when Little Mac taunts and is also a trophy. Additionally, he was heavily featured in Little Mac's reveal trailer.

Doc Louis is featured as a Master Spirit in Super Smash Bros. Ultimate. Once freed, he runs a gym where other spirits can train to level up on their own. Like the other Master spirits, Doc Louis cannot be used in battle. 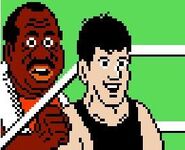