Diomedes, also known as the Severer of the Dark is a Demon that appears as a large horse with a large blade protruding from its forehead and serves as one of Bayonetta's summons. Diomedes used to be one of king Diomedes' four man-eating horses. After its dead, its soul was sent to Inferno where it took the name of its old master and became a Demon.

Diomedes makes its first appearance at the end of Chapter III where it is summoned to finish off the three Glamor that captured Loki. The Demon is then summoned during Chapter V where it is used to finish off Pain. Diomedes makes one last appearance in the story in Chapter XII where Bayonetta uses it to reach Loki and the Masked Lumen. After saving Loki, Bayonetta and the Masked Lumen fights briefly on the back of Diomedes before both falls leaving Diomedes to carry Loki to safety.

"One of the four man-eating horses that were owned by the ruler of a fallen kingdom. With the demise of the kingdom, the horses were murdered and arrived in hell. Of the four, the soul of one inherited the name of the king and was reborn as a demon.

The large blade extending from its forehead is a soul reaper that leaves a trail of mutilated dead in whatever direction it runs.

Though it typically hates being treated like a horse, it tolerates those who have proven themselves worthy." 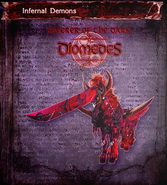 Diomedes' page in the Book of Infernal Demons.
Add a photo to this gallery
Retrieved from "https://nintendo.fandom.com/wiki/Diomedes?oldid=520684"
Community content is available under CC-BY-SA unless otherwise noted.