This is a gallery of screenshots of de Blob 2, the game's different cover art, and artwork made for the game.

Blob on a Z Jump.

Blob near The Senate near a tank and some Inkies.

Blob going to the Space Faculty.

Blob on the football (soccer) field.

Artwork of Blob and a description for him.

The beta logo with the beta name.

Blob on a soda tower in Soda Falls.

Blob on top of a police station.

Blob in the Inky Fabricator.

A Raydian telling Blob to attack some Inkies.

Blob being hypnotized by a Hypnodisc.

A cutscene of a Raydian at an employment office.

A screenshot of the DS version.

A second screenshot of the DS version.

A third screenshot of the DS version.

The game's American cover for the Wii. 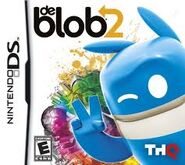 The game's American cover for the DS.

Switch box art
Add a photo to this gallery
Retrieved from "https://nintendo.fandom.com/wiki/De_Blob_2/gallery?oldid=449445"
Community content is available under CC-BY-SA unless otherwise noted.