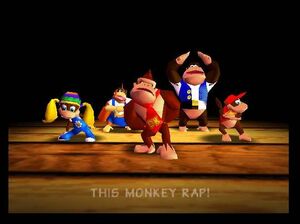 DK Rap is the Song that appeared at the beginning of the Nintendo 64 game Donkey Kong 64 right when you turned the system on. DK Rap is both loved and hated by both fans and critics. Its also the first time in a Nintendo published game to use the word "Hell". When it was remixed and used in Super Smash Bros. Melee and Super Smash Bros. Brawl, the word "Hell" was replaced with "Heck.

Response from the creator

Grant Kirkhope, the composer of Donkey Kong 64, said the following in 2010 (many years after the game was released):

"Aaaaarrrggghhhh.... Don't mention the DK Rap... it wasn't my fault honest! Blame George Andreas the game designer — it was all his idea. I still get made fun off at Big Huge Games about the DK Rap. What can I say, it was supposed to be a joke — you know, monkeys rapping about pineapples and bananas — and it wasn't supposed to be a serious attempt at rap music. Oddly enough, Nintendo still used it on Super Smash Brothers and had it re-mixed by some Japanese DJ... weird! I think my tombstone will read, "here lies the body of Grant Kirkhope, he wrote the DK Rap, may God have mercy on his soul". Heh!"

Retrieved from "https://nintendo.fandom.com/wiki/DK_Rap?oldid=456611"
Community content is available under CC-BY-SA unless otherwise noted.